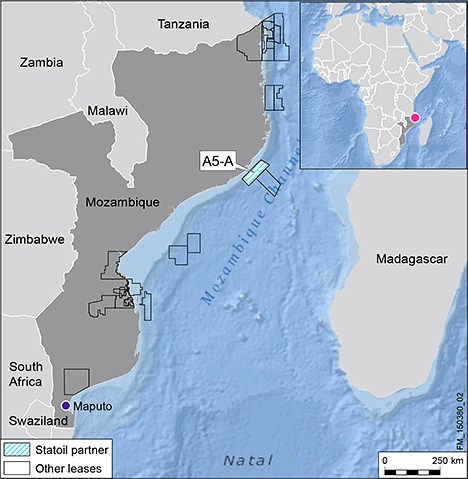 Norwegian explorer Statoil has said it will no longer engage with Mozambique on acquisition of the offshore Angoche Area A-5 Block citing lack of progress since talks began in 2015 after they were awarded the license following the first licensing round.

According to Statoil spokesman Erik Haalnd in an interview with Reuters the company had decided to disengage in the negotiations due to little or no progress over the last 24 months as well as a deteriorating business environment.

The other joint venture partners Eni through its subsidiary Eni Mozambico (operator),Sasol and ENH are however allowed to continue with negotiations.

The A5-A block is located in the Northern Zambezi basin in the Angoche area about 1,500km north of the capital Maputo and covers an area of 5,145 square kilometres in water depths ranging from 200 to 1800 meters

Statoil had earlier described the block as a very promising frontier basin with significant oil potential.

“The position strengthens and develops our global exploration portfolio. We are enthusiastic about this opportunity and look forward to working with Eni, Sasol and ENH to explore for hydrocarbons offshore Mozambique,” Said senior vice president for Statoil’s exploration activities in the Western Hemisphere Nick Maden.

Eni Mozambico is the operator of the Joint Venture with 34 percent participating interest while partners Statoil and Sasol have 25,5 percent each and  ENH holds 15percent.