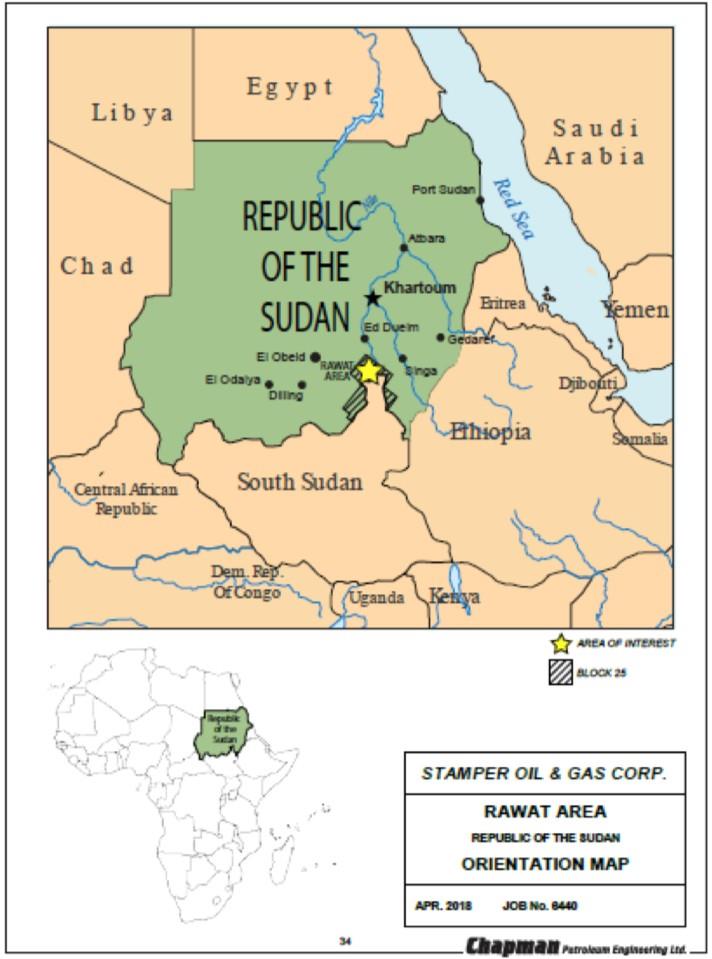 Stamper Oil & Gas has announced that Chapman Petroleum Engineering, independent petroleum consultants of Calgary, Alberta, has completed an update on the oil and gas reserves and economics evaluation (‘Chapman Reserves Evaluation Report’) that was previously announced on January 23, 2018, on the Sudan development prospect under National Instrument 51-101 (‘NI 51-101’).

The Company’s reserves and economics evaluation performed on Block 25D and Block 25E of the Sudan prospect as set forth in the Chapman Report. Chapman has been updated with Gross Property Reserves of 182 million stock tank barrels (‘MSTB’), which translate into a 22% increase.

The update was undertaken as a result of new positive test information from the recently drilled Rawat C-10 well on Block 25D. Log analysis shows pay in three of the known reservoir zones of the Galhak Formation, as well as a new pay zone in the main Galhak Sand.

‘With the probability that the quantities recovered will equal or exceed the estimated proved reserves on the Sudan oil project, management is confident it will execute its business strategy and with the price of Brent oil recently hitting $ 72.58 will convert into significant upside with 182 million barrels. The Stamper team were previous operators with proven record of sustainably delivering complex international projects along with considerable experience in Sudan over the last 25 years. I have never been more excited as I am now to be looking for the next elephant oil discovery along with the good people of Sudapet.’

State Oil Corporation may farm-in up to a 50% interest pursuant to the Memorandum of Understanding (‘MOU’) with the Sudan operator on Block 25. State has an office and technical personnel in Sudan and upon approval of TSX.V, State will become a 100% wholly owned operating subsidiary of Stamper.

Plans are to equip and tie in the six completed and tested wells to production facilities. In addition, the four already drilled wells waiting completion are expected to be on production early 2019. Stamper intends to drill six new infill wells on identified locations along the trend in late 2018 and 2019. As of the new updated Reserve Data, a total of 33 new additional locations will be drilled between 2020 and 2022 in the Rawat and Wateesh areas.

Block 25 prospect is located in the White Nile State in the south eastern portion of the Republic of Sudan, adjacent the border with Republic of South Sudan. The land is arid and relatively flat. The area is sparsely populated and is located west of the White Nile. There is limited road system and agriculture in the area. The nearest major communities are Kosti and Rabak about 150 km north of the project area where there is a railway station, airport and a major sugar refinery. The Government of Sudan is anxious to develop its oil resources and the Company has the full support and assistance of the government.

Operating costs have been estimated to be $10,000 per well per month plus $8.00 stock tank barrels (‘STB’) for variable operating costs. It is estimated that transportation costs to a sales point will be $5.00/STB. These cost estimates are based on the experience and judgement of Chapman and discussion with the Company.