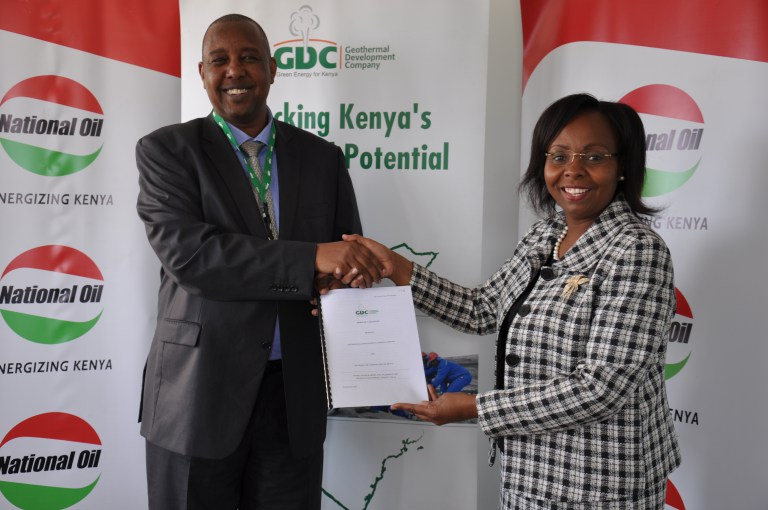 GDC and the National Oil Corporation of Kenya (NOCK) have signed an agreement which will see the latter supply diesel for drilling and water pumping activities for the Lake Baringo – Silali Geothermal Project.

The MD said that the deal will ensure proper supply of fuel to expedite the drilling process for GDC.

“This is a great milestone. We are going to deliver green and reliable energy as promised,” he said.
On her part, Ms. Mwangi appreciated the partnership adding that Nock will ensure constant supply of fuel.

The Baringo-Silali Block has an estimated potential of 3,000MW which will be developed in phases. The first three phase will each develop 100MW with funding from the Government of Kenya and KfW. Detailed surface studies were completed in early 2013 and an Environmental and Social Impact Assessment (ESIA) License obtained from NEMA. A community engagement framework has been established and the community has given GDC land access rights.

The Government of Kenya (GoK) is funding the construction of access roads and community engagement initiatives while KfW has given GDC a concessional loan of Euros 80 Million or approximately. Ksh8 billion for the drilling of 15-20 geothermal wells, undertaking several consultancies and installing a water pipeline to supply water for drilling.

So far, GDC has completed a seventy kilometer access road to open up the Baringo-Silali area for drilling. GDC has also contracted Hong Kong Off-Shore Oil Services Limited (HOOSL) to drill 15-20 geothermal wells. Drilling is set to begin in the early 2017