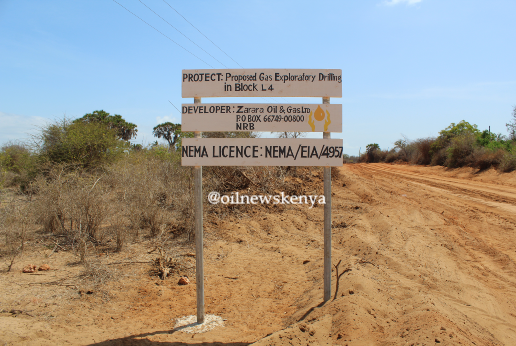 Zarara Oil and Gas is set to spud the Pate 2 well in Lamu’s Block 4 this weekend using a Drilling Services  top hole drilling rig of 750hp to a depth of 300 meters OilNews Kenya has learnt. The rig which set sail from the Mombasa port yesterday aboard a barge is expected to spud both the Pate 2 and Pate 3 wells in the next fortnight with each well expected to reach the 300 meters depth in a period of five days after drilling begins.

The decision to start off with a top hole drilling rig is to beat the set deadline of 30th April as to when the company has to spud the Pate 2 well as the 2600hp Sakson SK604 rig which will complete the well to a maximum depth of 4500 meters faced delays in inspection and is currently on transit to a Tunisia Port from its earlier location in Algeria 800 kilometers onshore. From there it will set sail to Kenya either through the Mombasa port or the nearby Lamu port.

The drilling site has been ready since late November with the earlier spud date deadline set for 30th December 2017 which was missed after the earlier contracted rig from Greatwall Drilling was unavailable following a fallout between the two companies. Since then security teams as well as hospitality staff have been in the camp awaiting a new rig.

Blocks L4 and L13 operated by Zarara Oil and Gas are believed to be gas prone acreage that have in the past seen discoveries by Shell/BP and are valued to have current estimated unrisked volumes of gas in place of 1.5TcF capable of supporting a 900MW combined cycle gas turbine power station for 25 years .

Zarara Oil and Gas the operator of blocks L4 and L13 is currently operating under a second extension to the former extension by the Ministry of Petroleum and Mining to enable them to drill a well in Pate Island. The second extension means the contract will now expire on 2nd April 2019 four months after the earlier 2nd December 2018 expiry.

Already OilNews Kenya had reported that the company has contracted Norwegian company North Sea Well Engineering Limited (Norwell Engineering) as the design and planning company that will ensure everything goes as plotted. Other companies contracted as reported include:  Medivac-Kenya which will provide medical services to the workers in camps while corporate security company and risk management contractor Salama Fikira will be in charge of security all of which are already on site.

Zarara Oil and Gas Limited (‘Zarara’) which holds a 75% working interest is a 100% subsidiary of Midway Resources. CH-Swiss Oil Holdings International holds 15% and the National Oil Company of Kenya at 10%. MRI has negotiated a legally binding heads of agreement for the eventual acquisition of the 15% interest of CH-Swiss Oil Holdings.