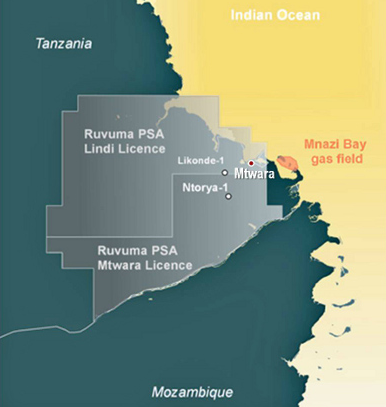 In partnership with operator Ndovu Resources, a subsidiary of Solo’s joint venture partner Aminex (75% interest), Solo expects the move will dramatically de-risk and increase the prospectivity of the Ruvuma licence, enabling the existing four leads to be defined as drill-ready prospects and facilitating the on-going farm-in process that commenced Q4 2012.

The new surge of exploration at Ruvuma is being undertaken by seismic contractor African Geophysical Services, initially to a maximum of 950 kilometres, and follows the issue of an appraisal licence by the Tanzanian Government in July 2013. Covering 760 square kilometres of the licence’s 6,079-square kilometre total acreage, the appraisal area critically hosts the flagship Ntorya prospect.

Ntorya-1 is a gas discovery of substantial proportions. 2012 drilling identified a gross 25-metre sandstone interval, from which flows of more than 3,000 barrels of oil equivalent per day were achieved on a one-inch choke.

The outcome is that the Ruvuma licence is believed to hold unrisked potential reserves of 5 tcf of gas, with Ntorya alone holding 1.17 tcf of gross unrisked gas (ISIS Petroleum Consultants estimate). Appraisal work is expected to confirm these volumes and, potentially, push the resource estimate to even higher levels.

Tanzania is Africa’s new natural gas frontier, together with neighbouring Mozambique. According to current estimates, the nation hosts more than 40 tcf of gas, primarily offshore, a figure that could rise five-fold over the next five years should current and near-term exploration follow past discovery trends. In that eventuality, Tanzania would be on a level footing with some Middle East producers and a significant presence as a world energy producer.

And, as recent discoveries underline, there is every indication that stated resources will increase dramatically.

December 2013 has already seen Statoil and co-venturer ExxonMobil announces a fifth major natural gas discovery offshore Tanzania (Block 2). The discovery of an additional 2 to 3 tcf in the Mronge-1 well, announced on 6 December, brings total in-place volumes to between 17 and 20 tcf in Block 2.

Then, on 10 December, the BG/Ophir Energy joint venture announced that it, too, had raised its recoverable resource figure from its offshore acreage (Blocks 1, 3 and 4), to around 15 tcf. All 14 wells sunk to date have returned a 100% success rate.

A few weeks earlier, in a move that underlines the growing interest of global energy companies in the Tanzanian gas space, Ophir announced its decision to sell its 20% interest in these blocks to Pavilion Energy, a wholly owned subsidiary of Singaporean investment company Temasek, for a little under US$1.3 billion.

All four blocks are located close to Ruvuma and part of the same hydrocarbon system, but, as deep-water offshore developments, their pathway to production is substantially more complex.

The Government of Tanzania is actively encouraging the development of the natural gas sector, which is driving the expected 6% rise in FDI inflows for 2013 to US$1.8 million, according to the Tanzania Investment Centre.

26 production-sharing agreements (PSAs) are already in place with several overseas companies. The Government has recently announced its objectives for the industry, including regulating mid and downstream activities, gas processing and liquefaction, storage and distribution (‘National Gas Policy of Tanzania 2013’ document, October 2013) and firmed up PSA terms, including taxes and royalties in November to prepare for the advent of large-scale production.

Ruvuma: a unique Tanzanian gas play in the pipeline

While the Ruvuma Basin has become one of the most active exploration areas for gas in East Africa, the onshore portion of the basin – of which the Solo/Aminex licence comprises a substantial part – remains largely overlooked. Yet there are several compelling reasons why investors should pay attention.

Firstly, work undertaken at Ruvuma has proven that gas condensate is present in volume. Given the favourable economics of onshore well development compared to their deep-water equivalents, coupled with generally shorter timescales, the licence represents a potentially near-term value opportunity.

Indeed, Solo has already indicated that production from Ntorya would be possible within as little as 18 months to two years, presuming that a farm-in partner comes onboard or an alternative financing package is arranged.

Secondly, while international gas explorers are focusing their efforts in offshore Tanzania on the prospect of long-term LNG supply to the energy-hungry Far Eastern market, Solo and Aminex intend that gas from Ruvuma will serve domestic markets.

Tanzania does not have an existing LNG export facility – although the Deputy Minister for Energy and Minerals George Simbachawene announced provisional plans on November 27, 2013 to construct a suitable industrial area, probably in the southerly Lindi region, for completion by 2020. By end-2014, however, there will be a gas pipeline from Mtwara in southern Tanzania to the capital market of Dar es Salaam.

This pipeline, which takes a route a mere 20 kilometres from the Ntorya-1 well discovery, could quickly unlock the true value of the Ruvuma discovery.  Hooking Ntorya into the new gas network and ensuring that its gas is sold on similar pricing terms to those being offered to other regional developers is a critical objective for the upcoming months.

“We want to have something from the Tanzanian government that says Ntorya gas will go to this pipeline and it will get a certain range of price. And I think that’s possible,” Solo Executive Director Neil Ritson has explained.

At Ruvuma, Solo, together with Aminex, has a window of opportunity that offers substantial upside potential. It is anticipated that results from the current programme of infill seismic over already identified prospective targets, if favourable, will solidify the licence as a viable commercial play and attract greater interest from potential farm-in partners.

Should a suitable partner be sourced – providing sufficient funds for the sinking of appraisal wells – a development plan be finalised and suitable pricing and pipeline usage terms be concluded with the Government of Tanzania, Ruvuma will be well placed for near-term production well in advance of year end-2016, when the remainder of the PSA outside designated appraisal, development or production licences, is due to be relinquished.