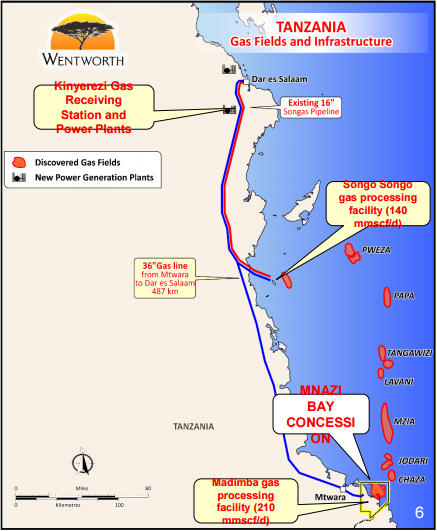 Maurel et Prom has scheduled a slick line campaign towards the end of March 2019 which will include opening the sliding-sleeves of various well completions and acquiring static pressures in the Lower MB sand interval.

The campaign involves opening sliding sleeves, which shut off or open flow from one or more reservoir zones and allows for more operational flexibility in the asset with regards sustaining plateau production.

According to JV partner Wentworth Resources the pressure monitoring of sands currently not flowing will further refine the Joint Venture understanding of both in-place and recoverable volumes in all intervals of the Mnazi Bay field.

It is expected that demand will increase in H2 2019 and beyond due to an increase in demand from Dangote Cement Plant (from 15 MMscf/d to 35 MMscf/d) and the Kinyerezi Power Complex realizing its full capacity. Following this it is expected that the average daily production rate will be limited to 70 MMscf/day from 11 March 2019 until early April 2019.

“Despite this reduced production, the onset of the rainy season in April through May 2019 and the scheduled maintenance of the power stations at the Ubungo Complex in Dar es Salaam, the Company is maintaining current guidance for 2019 average daily production of between 75 – 85 MMscf/day,” Wentworth said in a statement.

Meanwhile Wentworth reports that payment for gas sales in January and February from the Mnazi Bay Concession have been received from both TPDC and Tanzania Electric Supply Company Limited (TANESCO).