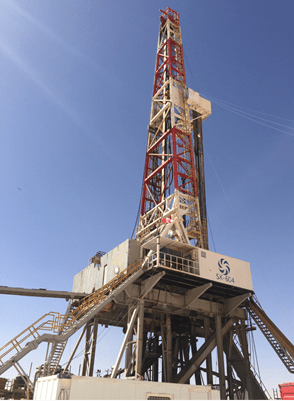 According to Midway Resources the well which drilled on Pate Island and targeted the Pate sub-basin in the onshore Lamu Basin reached a well reached a total depth of 4,307 meters and penetrated the primary Lower Tertiary Kipini objective.

“Like the Pate-1 well, Pate-2 has been operationally challenging. However, this is an exciting result for the company making the first hydrocarbon discovery in the onshore Lamu Basin,” Peter Worthington, Chief Executive Officer of MRI, commented.

The well which has taken eleven months to complete took considerably longer than had been planned, partly because of difficult drilling conditions comprising very hard shales in the caprock interval. At the last stage of drilling higher pressures had to be carefully managed to maintain a safe operation confirming the presence of relatively higher pressure natural gas in several reservoir intervals with in the Kipini Formation.

Despite the find Midway reports that a clear gas water contact was not yet been identified during drilling or logging and thus (although the well has not been tested as the intersected sands, being relatively thin and fine grained are now believed to be located in the distal part of the Kipini delta) the well is considered unlikely to be commercial on a standalone basis and will be plugged and abandoned, although it would be capable of re-entry if desired.

This said the company says since the well results successfully confirmed a working petroleum system in the Pate sub-basin of the Lamu Basin any further appraisal activity with respect to Pate-2 well will now focus further exploration activity within a Kipini play fairway which Zarara believes exists within Blocks L4 and L13.

“Whilst not commercial at this location, it has already enabled us to map the extent of the Kipini play fairway across Zarara’s acreage in L4 & L13 and better target thicker sands in another structure. It also provides encouragement to explore for further drilling targets at reduced risk and a better understanding of the play fairway,” Worthington adds.