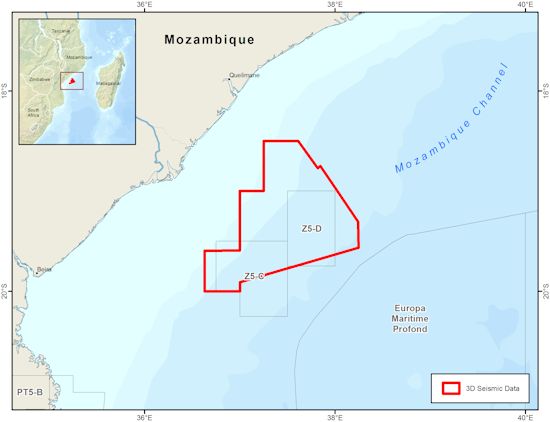 CGG has announced that the fast-track 3D seismic data from its recent Mozambique multi-client survey in the outer Zambezi Delta Basin is now available for license. Interested international oil companies with an Africa focus can view the high-end data set in CGG data rooms in anticipation of the country’s 2019 licensing round.

In an announcement made during the Africa Oil Week CGG said the data covers a 15,400 km2 area over blocks Z5-C and Z5-D and surrounding open acreage. It was acquired as part of a multi-client program agreed between CGG and Mozambique’s Instituto Nacional de Petroleo (INP) in 2017.

Final PSDM deliverables will be released in Q4 2019 and be complemented by a JumpStart™ integrated geoscience package as well as a geological regional study (2017 East Africa Robertson Study), and the Robertson New Ventures Suite of exploration screening tools.

Luc Schlumberger, EVP, Multi-Client & New Ventures, CGG, said: “Our comprehensive suite of geoscience products for Mozambique will bring the industry new insight into the hydrocarbon prospectivity of this exciting new exploration area. The fast-track data has already revealed key details of how the prospective reservoirs of the thick Zambezi Basin sediments are affected by the nearby Beira High. This valuable insight will help exploration companies prepare their strategy for the upcoming licensing round.”

Blocks Z5-C and Z5-D in the Zambezi Delta were awarded to N-Exploration (100% Rosneft subsidiary), ExxonMobil Exploration and Production Mozambique Offshore during the fifth licence round organized by the Republic of Mozambique Institute of National Petroleum (Instituto Nacional de Petróleo) in 2015.