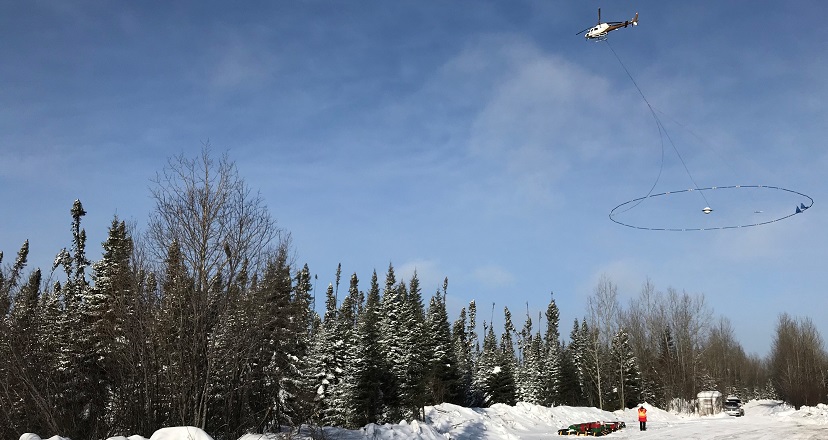 CGG Multi-Physics is pleased to announce that its Helitem helicopter time-domain electromagnetic system has successfully acquired high-quality, broad-spectrum Airborne Electromagnetic (AEM) data at a base frequency of 7.5 Hz. This is a significant breakthrough for resource exploration worldwide, and an industry first.

As shallow mineral resources are depleted, and mining activity moves to ever greater depths, mineral explorers are searching deeper and in more difficult-to-image environments, such as beneath conductive cover sequences. The ability to effectively energize deep conductive targets and survey at lower frequencies is critical to improving the imaging performance of airborne electromagnetic systems in these environments. Until now, these capabilities have been beyond the reach of AEM systems.

The key to this major advance has been CGG’s continued investment to improve its AEM receiver design. Historically, receiver motion-induced noise has been the primary limiting factor in acquiring useful low base frequency AEM data. Evolutions in the design of CGG’s Helitem AEM system in terms of both receiver electronics and a patented receiver suspension system now allow operation at a base frequency of 7.5 Hz. An innovative change in transmitter pulse-shape also enables early off-time measurement and effective energizing of deep conductive targets.

CGG’s Helitem AEM system can now image the Earth’s resistivity to greater depths than other systems while retaining resolving power throughout the section. A comparison of resistivity images from CGG’s 30 Hz and 7.5 Hz Helitem systems shows that the 7.5 Hz data provides more interpretable information about the near-surface and also delivers accurate geological information at depth.

Greg Paleolog, SVP, Multi-Physics, CGG, said: “This significant breakthrough puts Helitem in a league of its own as the most advanced helicopter electromagnetic technology for exploring conductive targets at great depth. This unique capability makes Helitem the premier AEM technology for explorers requiring deeper and clearer imaging of new orebodies.”