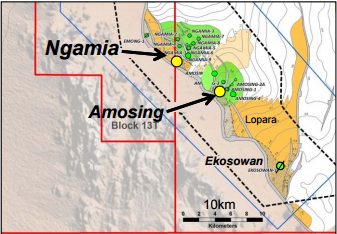 The continued appraisal follows the completion of Extended Well Testing in the Amosing field which commenced in May 2015 and saw production from all five zones was at a combined average constrained rate of 4,300 bopd under natural flow conditions.

Some of the cumulative volume of 30,000 barrels of oil produced into storage will be used in the Early Oil Pilot scheme that expects to truck approximately 2,000 bopd gross in the next few months.

After the Amosing 6 the rig will then move to drill the Ngamia-10 well, an appraisal well to the south of the Ngamia discovery well.

Another fourth well planned in this programme is the Etete prospect, a structure approximately 2 km south of the Etom field.

Tullow Oil has said it will evaluate this programme and could extend it by up to four additional wells depending upon the results from these initial four wells.

The commencement of appraisal activity follows the company believe that significant upside remains across the South Lokichar Basin with the potential to increase the resource estimate to over 1 billion barrels of recoverable oil.

The other partners in the block are Maersk Oil and Gas and Africa Oil all with a 25 percent share.

Meanwhile Tullow Oil has announced its full year results for the year ended 31 December 2016 where it reported 2016 revenue of $1.3 billion and a post tax loss of $0.6 billion after write-offs and impairments .