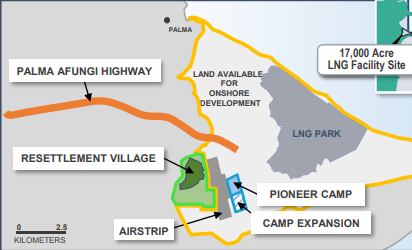 Anadarko Petroleum the operator in Mozambique Offshore Area 1 has said it has allocated approximately $200 million toward its LNG project, pre FID (final investment decision), for its’s portion of the costs associated with ongoing site preparation for the shared onshore facilities.

This even as the company  says remains on track for FID consideration in the first half of 2019, and anticipates adjusting its capital-investment expectations associated with the Mozambique LNG project at the time of project sanction.

During the 3rd quarter, Anadarko and Area 1 co-venturers continued advancing the conversion of off-take volume from non-binding HOAs to long-term SPAs.

Additionally, progress was made on the offshore contractor and equipment providers, with recommendations for award awaiting Government of Mozambique approval. Site preparation activities are ongoing at the Afungi onshore site employing about 3000 Mozambicans.

During the last quarter, Area 4 which is owned and operated by third parties, elected to join the Anadarko-led resettlement and airstrip projects as a 50% participant.