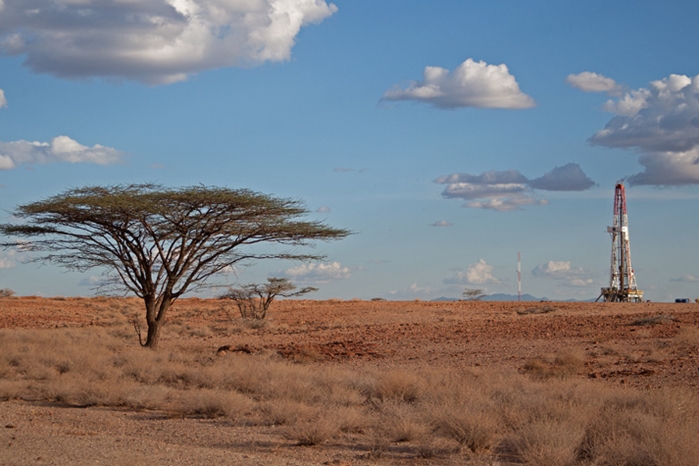 Tullow Oil plc has announced that the Erut-1 well in, Northern Kenya, has discovered a gross oil interval of 55 metres with 25 metres of net oil pay at a depth of 700 metres. The overall oil column for the field is considered to be 100 to 125 metres.

The objective of the well which was drilled ten kilometers north of the Etom-2 well was to test a structural trap at the northern limit of the South Lokichar basin and shares important characteristics.  Fluid samples taken and wireline logging all indicate the presence of recoverable oil.

“This is an exciting discovery from a bold exploration well that proves that oil has migrated to the northern limit of the South Lokichar basin. This extends the known hydrocarbon limits of the basin beyond the successful Etom discovery into the underexplored northern part of the basin where we have several undrilled prospects,” says Tullow Oil exploration director Angus Mccoss.

Erut-1 which commenced drilling on December 18th 2016 successfully shows that oil has migrated to the northern limit of the South Lokichar basin and has de-risked multiple prospects in this area which will now be considered in the Partnership’s future exploration and appraisal drilling programme.

“We are very pleased with this result which further confirms the potential of the northern portion of the Lokichar Basin unlocked by the Etom-2 discovery. We are very keen to expand our current drilling program to test additional prospects in the area which have now been de-risked by this discovery. Increasing discovered volumes will further enhance the development and pipeline project planning currently moving forward,” said Africa Oil CEO Keith Hill.

The PR Marriott Rig-46 drilled the Erut-1 well to a final depth of 1,317 metres and will now move to the southern part of Block 10BB where it will spud the Amosing-6 appraisal well.

Tullow Oil in its last update last week said it would consider expanding extending the programme by up to four additional wells in 2017, depending upon the assessment of the results from the initial four wells.

Tullow operates Blocks 13T and 10BB with 50% equity and is partnered by Africa Oil Corporation and Maersk Oil both with 25%.

—     Tullow has found 25m of net oil pay. This means that we have drilled vertically through 25 metres of rock that is holding oil. We cannot yet extrapolate exactly how much oil that is but it’s very encouraging.

—     This discovery is very significant and shows us that oil has migrated to the very northern part of the South Lokichar basin “the Northern Triangle” which has been underexplored thus far. This was a wildcat well and not an appraisal well so to find oil here is very encouraging indeed for the wider prospectivity of the basin and the rest of our exploration and appraisal campaign. The key message here is that finding oil this far north substantially reduces the risk when drilling other wells nearby. The fact that we have found oil here makes it much more likely we will find even more oil in the area as we explore and appraise.

—     This discovery does not change Tullow’s view of view of prospective resources. We won’t be able to do that until later in our exploration and appraisal (E&A) campaign. It is important to realise that with an onshore project like this, that we will always add to our resources in relatively small steps and as we go along. This is why de-risking is so critical. However, we are on track with our 1 billion+ barrels of oil target and confirms our optimism that we can do this though the current campaign.

—     The next well will be drilled at Amosing- an appraisal well. We will look at the data from the Erut-1 well and assess where to drill next in the Northern part of the basin.