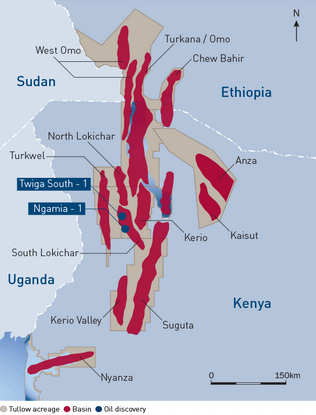 Tullow Oil plc (Tullow) announces that the Tultule-1 wildcat well in the South Omo block onshore Ethiopia, has reached a total depth of 2,101 metres and will be plugged and abandoned as a dry hole.

The well was targeting a reservoir section similar to the sands drilled in the nearby Sabisa-1 well where oil shows were encountered but these sands were not penetrated in Tultule-1.

Gas shows were however recorded which reaffirm the presence of a hydrocarbon source in the region. The results of both the Sabisa-1 and the Tultule-1 wells will now be analysed to determine the future exploration campaign for the area.

The OGEC rig will now move to the Chew Bahir basin in Ethiopia to drill the Shimela prospect in the eastern portion of the South Omo block where new seismic has delineated a number of exciting new prospects, some of which have encouraging seismic amplitude anomalies.

The well is expected to spud at the end of the first quarter of 2014.

Tullow is the operator of the Tultule-1 well with a 50% interest along with partners Africa Oil (30%) and Marathon (20%).

In Kenya, significant exploration activity continues in Block 10BB with the Amosing-1 well currently drilling and the Ewoi-1 well expected to spud by the end of the year. Following the discoveries made at Etuko-1 and Ekales-1, preparations are underway to flow test the wells with results expected early in the first quarter of 2014.