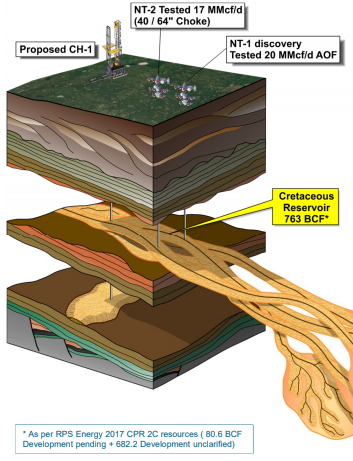 The tendering process for a rig to drill Chikumbi-1 (CH-1) is now complete according to Aminex with the company having received numerous bids. These bids are being evaluated on their technical and commercial merits.

The well is expected to delineate the Ntorya gas field in a significantly thicker section of the Cretaceous reservoir system and is also being planned to evaluate a potential deeper exploration target in the Jurassic formation.

If successful, CH-1 is expected to be produced into the existing Madimba Gas Processing Plant and ultimately integrated into a full field development programme.

Chikumbi has an anticipated spud date of late 2018 and is located 5km from 5km from Ntorya-1 well and 4km from the Ntorya 2 well.

The National Environment Management Council (NEMC) has already approved the Environmental Impact Assessment (EIA) status for the acquisition of further 2D and 3D seismic data over the Ruvuma Production Sharing Agreement acreage, focusing on the Ntorya discovery area. This new seismic will enable the acquisition of up to 700 square kilometres of new 3D seismic in the deep water.

ARA Petroleum Tanzania an affiliate of Eclipse Investments, the largest shareholder in Zubair Corporation is the new operator of the Ruvuma PSA after Ndovu Resources signed a binding farm-out agreement with the Zubair Corporation.