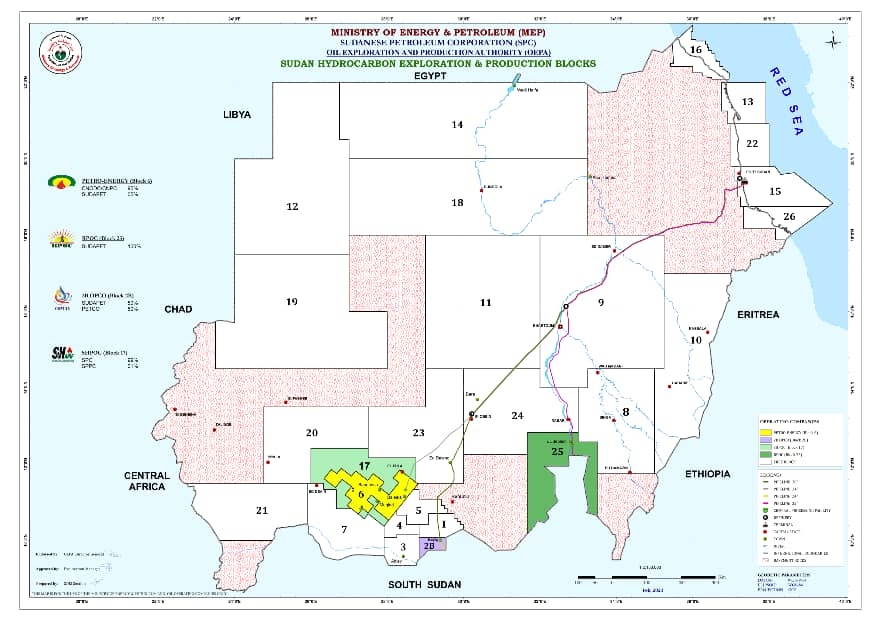 Source: Ministry of Energy and Mining

The Ministry of Energy and Oil has updated the map on the productive and empty oil blocks in Sudan in preparation for launching it for global investment. This is in line with the ministry’s approach in adopting effective policies and procedures in the field of promotion and attracting investors to work in the oil blocks and available investment opportunities, especially after the expiry of some oil blocks agreements and their full transfer to the state. The total number of open oil blocks in Sudan now total 26 including (5) marine blocks covering the territorial waters and coastal areas of Sudan in the Red Sea, and (21) land blocks covering the various states of Sudan .

Engineer / Mohamed Abdel-Ghani Awad, Head of Promotion Department at the General Administration for Oil Exploration and Production, said that the division process was carried out in a scientific manner. He adds the principles followed in dividing the squares, the most important of which are the considerations of sedimentary basins that contain oil reserves and the oil works that were carried out in the squares. Spatial mapping that is universally recognized and based on its reference on many previous and international experiences in this field. He said that these squares now include productive development areas and other promising exploratory areas, stressing that all investment boxes are open and producing after they have been modernized to attract major international companies in the field of oil and gas with high financial and technical capabilities to take advantage of the opportunities available .

It is worth noting that most of the producing blocks are currently concentrated in the Muglad Basin areas, including (11) oil blocks including production licenses and others that have already discovered oil reserves. The division was re-divided in some of its squares, in addition to Square (25) in the Melut Basin, as well as the re-division of the Red Sea squares. The map was completed with the rest of the squares in northern and central Sudan .