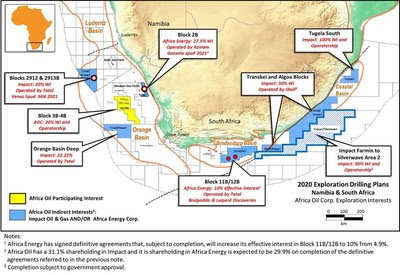 Block 11B/12B joint venture partners are contemplating an early production system (EPS) for a phased development of the Paddavissie Fairway according to Africa Energy.

Africa Energy says joint venture is currently performing development studies and preparing a field development plan and an environmental application with the intention of agreeing gas terms and submitting an application for a Production Right before the Exploration Right expires in September 2022.

The EPS would provide first gas and condensate production from the Luiperd discovery and would accelerate the Block 11B/12B development timeline by utilizing existing nearby infrastructure on the adjacent block in order to supply gas to existing customers in Mossel Bay.

The EPS is expected to significantly decrease the required capital expenditures to reach first production on Block 11B/12B. Africa Energy adds it expects that a full development of the Paddavissie Fairway would follow the EPS as the gas market expands in South Africa.

The company says it is encouraged by the ongoing analysis of the seismic data that has identified additional prospectivity in the Paddavissie Fairway and to the east, confirming the large exploration upside remaining across the block. The development of Block 11B/12B will have positive implications for the South African economy and will be critical in facilitating the country’s energy transition beyond coal with a domestic natural gas supply.

On Block 2B, the Company and its joint venture partners tendered for a semi-submersible rig and completed a seabed survey in preparation for drilling the Gazania-1 well. The operator, Azinam Limited (Azinam), finalized the well plan and is currently conducting negotiations with various rig contractors to optimize the well budget and drill the Gazania-1 well before the Exploration Right expires in November 2022.

Garrett Soden, the Company’s President and CEO, commented: “We are very enthusiastic about the potential value of Block 11B/12B, both from the proposed development of the Paddavissie Fairway and from the large exploration upside remaining across the block. We look forward to TotalEnergies concluding gas price negotiations with the government and applying for a production license by next September. On Block 2B, we expect Azinam to fund the escrow account and contract a rig by the end of the year, according to the terms of our farmout agreement, in order to drill the Gazania well before the license expires next November.”