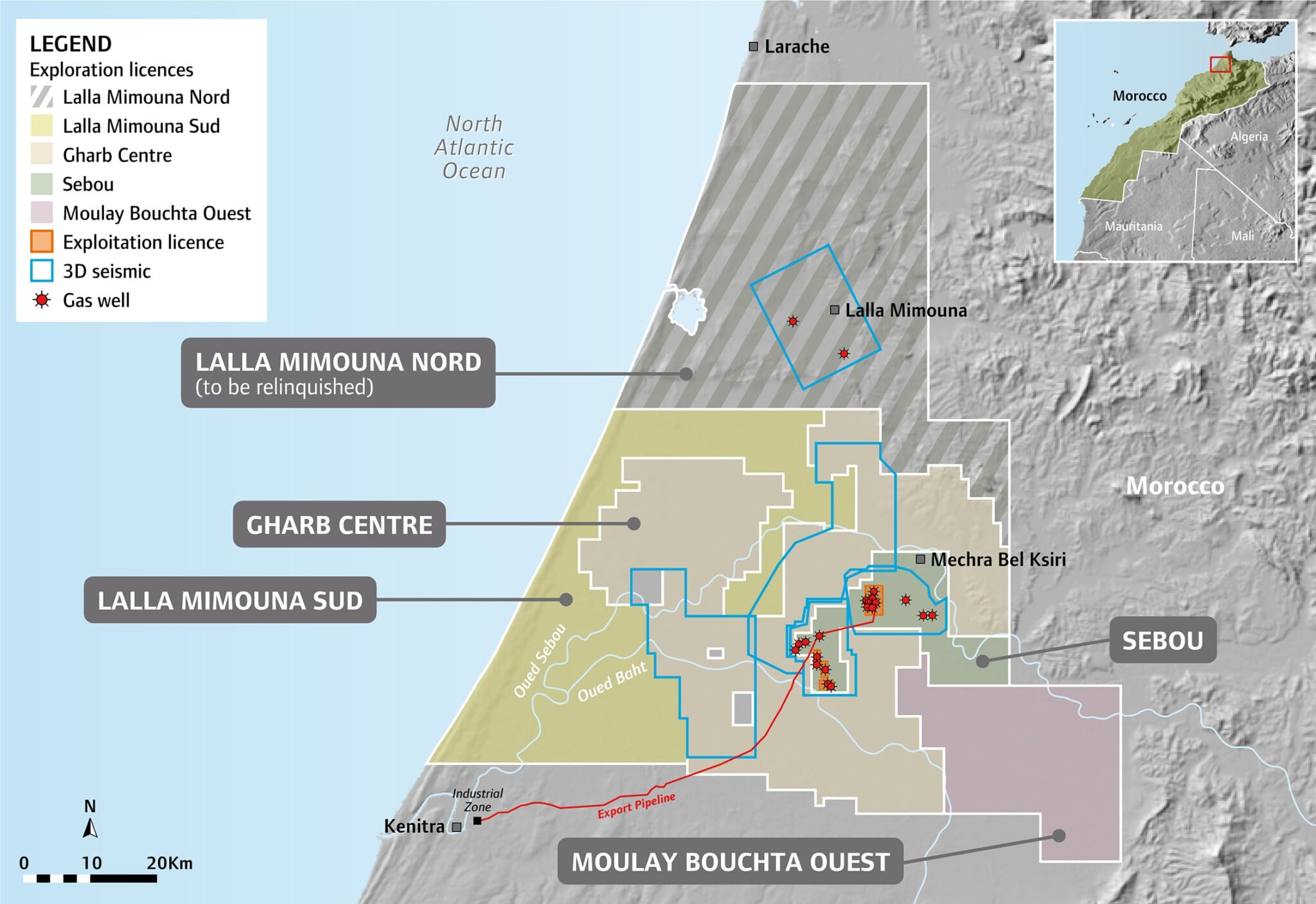 ·      Out of the 14 wells completed across SDX’s portfolio in the year to date, eight were producing as at 30 September 2022, two were connected to production post period-end and another two will be connected by the end of November 2022.

·      Aleph Commodities and a group of investors acquired a strategic stake in the Company with a view to provide support and financing for growth initiatives.

“SDX’s business continued to generate strong EBITDAX and operating cash flow for the nine months to date. We have also successfully drilled thirteen development and exploration wells across our three assets and are delivering on our production guidance. Due to higher than expected standby costs for equipment needed to maintain facility operations, we have increased our Capex guidance for the year.

·      Entitlement production for the nine months ended 30 September 2022 of 3,729 boe/d was 3% higher than 2022 mid-point guidance of 3,638 boe/d, driven by strong performances in Morocco and at South Disouq, with West Gharib’s production lower than expected due to drilling delays and higher water and sand production from some wells drilled on the flanks of the Meseda field.

·      The Company’s operated assets recorded a carbon intensity of 3.8kg CO2e/boe during the first nine months of 2022.

·      In South Disouq, the planned three-well drilling campaign has been successfully completed. The SD-5X and SD-12_East discoveries have been brought online ahead of schedule, delivering production and cash flow. The MA-1X gas discovery well is in the process of being evaluated to determine a commercialisation strategy.

·      In Morocco, both wells (SAK-1 and KSR-20) in the two-well drilling campaign during Q3 2022 discovered gas. SAK-1 was subsequently tied into the Company infrastructure with production commenced post period-end. KSR-20 is currently undergoing testing and will be brought on production in Q4 2022. During Q3, several workovers were performed to access behind-pipe reserves.

·      YTD’22 the depletion, depreciation and amortisation (“DD&A”) charge of US$15.3 million was lower than the US$23.3 million for the same period in 2021 due to lower production in Morocco and a lower depreciable asset base in South Disouq, following the accelerated depreciation of the SD-12X borehole costs during H2 2021 and impairment recognised at year-end 2021.

o   US$11.5 million in Morocco covering; pre-drilling and standby expenditure for the recommencement of the Morocco drilling campaign (US$2.5 million), the drilling and completion costs for SAK-1 (US$4.3 million) and KSR-20 (US$2.1 million), US$1.5 million of additional expenditure on the KSR-19 well and US$1.1 million on various workovers and infrastructure works; and

o   US$2.2 million of West Gharib drilling costs across the eight wells drilled.

·      Liquidity: The Company’s net cash position as at 30 September 2022 was US$9.4 million, with cash balances of US$14.9 million offset by US$5.5 million drawn debt from the European Bank of Reconstruction and Development (“EBRD”) credit facility. As a result of various geopolitical factors, US dollar transfers by the Central Bank of Egypt have been delayed resulting in the need to draw the EBRD facility to pay head office general and administrative costs and certain US$ denominated operational expenses. It has been possible recently to repatriate funds, albeit this has incurred FX trading costs. Under the existing facility with the EBRD, US$0.2 million of additional undrawn lines remain available to the Company.

o  South Disouq: During the first nine months of 2022, the existing wells continued to exhibit natural decline and expected sand and water production, albeit this was partly offset by contribution from the two wells (SD-5X and SD-12_East) that came into production after 30 September 2021. Production guidance for 2022 reflects the disposal of 33% of SDX’s interest in the asset, 2-3% CPF and compressor downtime due to planned maintenance, the successful drilling of SD-12_East and SD-5X and several well workovers. The MA-1X gas discovery well is in the process of being evaluated to determine a commercialization strategy.

o  West Gharib: The existing well stock at the asset continued to produce steadily, albeit exhibiting natural decline as expected, partly offset by the contribution from the recently drilled eight wells of which six wells were on production as at 30 September 2022 and successful well workovers. Some of the new wells that were drilled on the flanks of the Meseda field have exhibited higher water and sand production than previously expected. The development drilling campaign will arrest the asset’s natural decline, with new wells beginning to grow production into 2023.

o  Morocco: The first nine months of 2022 saw strong demand from the customer portfolio, although consumption in the third quarter was lower compared to consumption during the first six months of the year due to summer/EID demand slowdown. 2022 production guidance is lower than 2021 production as the Company evaluates its ability to deliver to new and existing consumers based on its current reserves base and pricing environment.

·      The Company is updating its 2022 capex guidance to US$26.5-28.0 million (previously US$25.5-27.0 million) as it has incurred higher than anticipated standby charges for drilling equipment in Morocco. It was necessary to incur these charges to ensure appropriate operational flexibility for the two-well campaign.

·      2022 capex is fully-funded and predominantly relates to one appraisal and two exploration wells in South Disouq, up to eight new wells and facilities upgrades in West Gharib, and two new wells and a number of workovers in Morocco.

·      The remaining capex activities for 2022 includes two wells in West Gharib, a well workover in South Disouq and completion and the connection of one well in Morocco.

o  South Disouq: One appraisal well, SD-12_East, and two exploration wells, SD-5X (Warda) and MA-1X (Mohsen), have been drilled during the first nine months to 30 September 2022. The SD-5X well discovered gas in the basal Kafr El Sheikh sand, with EUR similar to the pre-drill expectation. SD-5X was tied-in and started production 13 May 2022 and is currently producing at around 10 MMscf/d of dry gas and c.100 bbl/d of condensate. The second well in the campaign, SD-12_East (Ibn Yunus North development lease) was successfully drilled and brought onto production on 1 July 2022 and is currently producing at around 7 MMscf/d, with no condensate. The third and final well of the 2022 South Disouq drilling campaign, MA-1X on the Mohsen prospect in the Exploration Extension Area, is a gas discovery in the primary Kafr El Sheikh Fm reservoir target finding 56.3ft of high-quality net gas pay. A well-test was conducted on MA-1X and is currently being evaluated to determine a commercialisation strategy. Following the disposal transaction, all three wells have been drilled with partner participation. In addition to the drilling activity, several well workovers will be undertaken to maximise recovery from the fields.

o  West Gharib: The development drilling campaign which saw three wells being drilled completed, tied-in and brought on-line during the first half of the year continued throughout the third quarter. The MSD-23 well, which spudded in Q2, reached TD on 11 July 2022 and encountered 131.5ft of good quality net-oil pay. MSD-23 also found an undepleted oil sand above the main Meseda reservoir interval, which represents a new reservoir that will be exploited at a future date. MSD-27, spudded on 22 July 2022 and reached TD on 7 August 2022, encountering 137.3ft of good-quality, net oil pay sandstone. The MSD-20 well, which spud 5 April 2022 but encountered technical difficulties, was side-tracked and ultimately reached TD on 23 August 2022, finding 58.5ft of good quality net-oil pay. The Rabul Field exploration well, Rabul Deep-1, spud 21 August 2022 and reached TD in the Matulla Formation on 17 September 2022. The well did not encounter hydrocarbons and is likely to be completed as a water injector. A total of 10 well workovers across the concession were undertaken during the third quarter of 2022, relating to a variety of operations (sand clean-out, tubing replacement, pump replacement, and recompletions to shallower reservoir sections).

o  Morocco: The Company concentrated on maximising recovery from its existing well stock, utilising its two compressors. During the third quarter, the 2022 drilling campaign commenced with the spudding of the SAK-1 well on 6 August 2022. The SAK-1 well reached TD of 1,196m MD on 24 August 2022 and encountered a gas sand at the primary target interval at 1,107m MD finding 3.7m of net pay with an average porosity of 31%. A secondary gas sand was found at 1,079.6m MD, with a net pay thickness of 1.1m and an average porosity of 28%. The well was subsequently tied into the Company’s infrastructure and production commended post period-end. The second well in the campaign, KSR-20, spud 12 September 2022 and reached TD of 1,410m MD post period-end on 1 October 2022, finding the primary target gas sands at 1,265m MD. The well is currently undergoing testing and will be brought on production in Q4 2022. In addition to the drilling campaign, workovers were performed to access behind-pipe reserves in a number of wells.