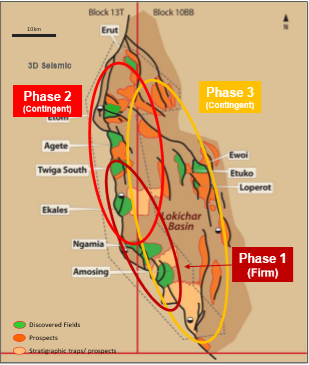 The Project Oil Kenya will target 72,000bopd to produce oil from the Ngamia, Amosing and Twiga fields with an estimated resource of 226mmbo (2c gross) during the foundation stage putting the estimated income by the country clearer compared to the 60,000 to 80,000bopd earlier reported The state department for Petroleun has said. Already the Kenya Joint Venture (KJV) has agreed on phased approach, technical work matured, Early Oil Production System operational and 1st cargo of 200,000 barrels having sailed-away on 26August 2019. A further 500,000 barrels will be sold to international market in February 2020.

Further pre-development activities are progressing well with FEED studies for upstream and pipeline completed, while ESIA on track for submission, all land gazetted, national Lands Commission surveys for valuation and acquisition is currently under way. Progress has also been made on contractual and fiscal terms with the signing of Heads of Terms (HoTs) with government, covering various legal, tax, transportation and regulatory issues, FID for Phase 1 is now expected in 2H 2020 upon delivery of various requirements including: long-form commercial agreements for upstream and pipeline projects, finalization and approval of ESIA, pipeline financing, land acquisition and submission and FDP approval.

The Project Oil Kenya has gained some ground on some of the FID requirement and land and water access having agreed upon. The project will source water from the Turkwell Gorge Dam located some 90km away in West Pokot County according to the Ministry of Energy easing worries that the project might lead to acute shortages in the already water scarce Turkana County. The government has revealed that the project will lead to the construction of a 24-inch cement lined pipeline with a capacity of 216,000bwpd or 34,340m3/day will see the community along the route also benefit with 112,000bwpd allocated while the project will consume 104,000bwpd. This utilization of the Kenya’s tallest and third largest biggest dam will also save the government from the shame of the underutilization of the Kes.6 billion dam constructed by a French firm Spie Batkinolles between 1986 and 1991 with a capacity of 1,641 million cubic metres.

Speaking during the Project Oil Kenya disclosure meeting, aimed at raising awareness for the foundation stage, the government said the project has also made headway on some 3350 Ha of land required for the upstream (1350Ha) and midstream (2000Ha) over 7 counties between Turkana and Lamu along the pipeline route having been gazetted.

Other than the finalizing of the commercial agreements among the major pending requirements is the incorporation of the pipeline company for the 824km Lokicar Lamu crude oil pipeline. The initial production phase/ foundation phase targets to drill 321 development wells, build an upstream production facility among other facilities expected to cost an initial $3Bn.

The project disclosure meetings will then be followed by the Environmental and Social Impact Assessment  consultations meetings next month.