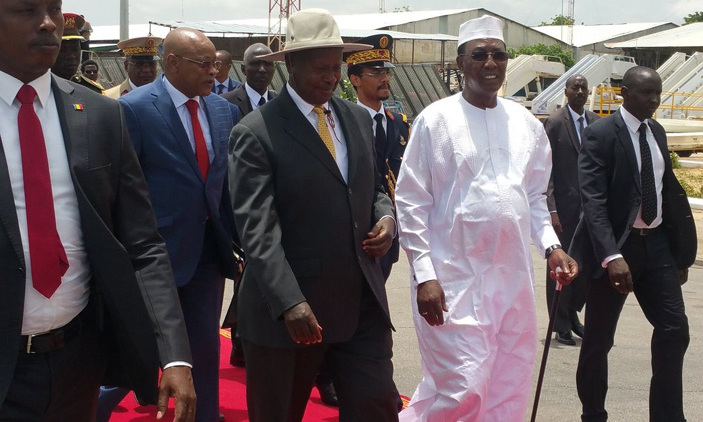 U.S. Attorney’s Office in the Southern District of New York has said it has charged Chi Ping Patrick Ho aka “Patrick C.P. Ho,” and Cheikh Gadio (the former Foreign Minister of Senegal) with participating in a multi-year, multimillion-dollar scheme to bribe high-level officials in Chad and Uganda in exchange for business advantages for a Chinese oil and gas company.The two Gadio and Ho who were arrested on Friday and Saturday respectively were charged with violations of the Foreign Corrupt Practices Act (FCPA), international money laundering, and conspiracy to commit both

According to Acting Manhattan U.S. Attorney Joon H. Kim, Chi Ping Patrick Ho and Cheikh Gadio allegedly conspired to bribe African government officials on behalf of a Chinese energy conglomerate in an international corruption scheme that spanned the globe. They are believed to have wired almost a million dollars mostly disguised as charitable donations through New York’s banking system in furtherance of their corrupt schemes with the aim of generate business through bribes paid to the President of Chad Idriss Déby and the Ugandan Foreign Minister.

According to the U.S Attorney Ho’s Ugandan scheme was hatched in the halls of the United Nations in New York, when the country’s current Foreign Minister who served as the President of the U.N. General Assembly Sam Kutesa, and then continued unabated upon his return to Uganda.

“International bribery not only harms legitimate businesses and fair competition, but it also destroys public faith in the integrity of government.  And when this type of international corruption and bribery touches our shores and our financial system, as the alleged schemes did, federal criminal charges in an American court may very well be the end result,” said Acting Manhattan U.S. Attorney Joon H. Kim.

The U.S attorney office has further said the alleged scheme by the two suspects put at risk a level playing field for corporate competitiveness, regardless of where they live or work and the criminal division was committed to investigating and prosecuting corrupt individuals.

“Their bribes and corrupt acts hurt our economy and undermine confidence in the free marketplace,” said Acting Assistant Attorney General Kenneth A. Blanco.

According to the FBI the scheme described in this case boils down to these subjects allegedly trying to get their hands on the rights to lucrative opportunities in Africa and were allegedly willing to throw money at the leaders of two countries to bypass the normal course of business, but didn’t realize that using the U.S. banking system would be their undoing.

Although the energy conglomerate was not identified the company which is a Shanghai-headquartered multibillion-dollar conglomerate that operates internationally in the energy and financial sectors details point to CEFC China Energy Company Limited established in 2002 by Ye Jianming.

In the first scheme (the “Uganda Scheme”), HO caused a $500,000 bribe to be paid, via wires transmitted through New York, New York, to an account designated by the Minister of Foreign Affairs of Uganda Sam Kutesa, who had recently completed his term as the President of the UN General Assembly.  HO also provided the Ugandan Foreign Minister, as well as the President of Uganda, with gifts and promises of future benefits, including offering to share the profits of a potential joint venture in Uganda involving the Energy Company and businesses owned by the families of the Ugandan Foreign Minister and the President of Uganda.  These payments and promises were made in exchange for assistance from the Ugandan Foreign Minister in obtaining business advantages for the Energy Company, including the potential acquisition of a Ugandan bank.

According to the U.S Attorney office this payment was a bribe to obtain business advantages for the Energy Company in its efforts to secure contracts and ventures in Uganda’s financial and energy sectors.  HO also provided the Ugandan Foreign Minister, as well as the President of Uganda, with promises of future benefits, including proposing to partner with both officials’ family businesses in potential joint ventures.  In exchange, the Ugandan Foreign Minister assisted the Energy Company in obtaining business in Uganda, including by facilitating the Energy Company’s interest in potentially acquiring a bank.

As alleged in the Complaint, the Chad Scheme began in or about October 2014, when HO and GADIO met at the UN in New York, New York.  At that time, the Energy Company wanted to expand its oil operations to Chad, and to do so, it wanted to enter into a joint venture with a Chinese government-owned oil and gas company (the “Chinese State Oil Company”) that was already operating in Chad.  Earlier that year, the Chinese State Oil Company had been fined $1.2 billion by the government of Chad for environmental violations.  HO enlisted GADIO – who had a personal relationship with the President of Chad – to assist the Energy Company in gaining access to the President of Chad, with the initial goal of resolving the dispute between the government of Chad and the Chinese State Oil Company, and the ultimate goal of obtaining oil opportunities for the Energy Company in Chad.

According to the U.S Attorney office, this “donation” was a bribe intended to influence the award of oil rights in favor of the Energy Company.  Following this $2 million pledge to the President of Chad, the Energy Company obtained a business advantage in its negotiations to acquire oil rights in Chad, in particular, by having the exclusive opportunity to purchase particular oil rights without facing international competition.  Ultimately, the Energy Company did not complete this acquisition, but instead purchased other oil rights in Chad from a Taiwanese company.  In exchange for GADIO’s efforts to facilitate the bribery of the President of Chad, HO caused $400,000 to be paid to GADIO’s firm, via two wires that were transmitted through a bank in New York, New York.

“IRS Criminal Investigation operates worldwide and has the expertise to identify bribery schemes such as alleged in the Criminal Complaint.  Our Special Agents are especially skilled at piecing together these financial puzzles, even those that involve such high level participants,” IRS-CI Special Agent in Charge James D. Robnett said.