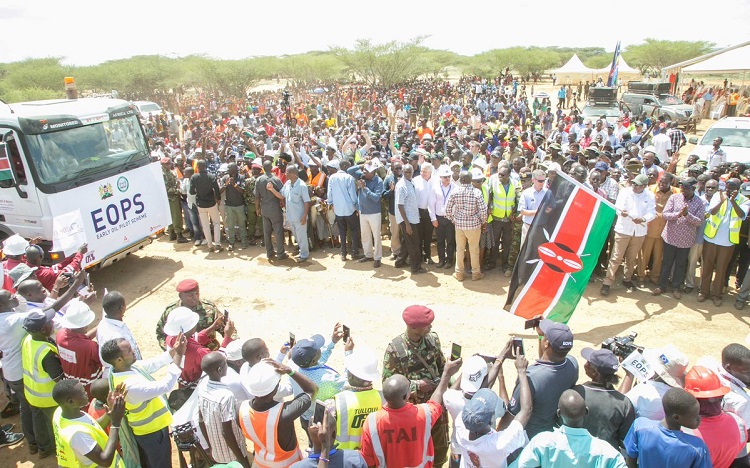 President Uhuru Kenyatta today said Kenya will effectively manage oil and other natural resources to avoid the negative results that have confronted many other nations following new discoveries.

Speaking during the flag off of 100,000 liters of stored crude oil in four trucks as part of the early oil pilot scheme he said there was a danger of losing all the benefits that can come from Kenya’s new oil wealth in the absence of effective resource management.

“The negative competition for oil and other natural resources has seen peaceful countries go to war. It has seen brothers take up arms against each other as mothers bury their children with no hope for the future,” said the President when he addressed dignitaries, leaders and residents of Turkana County who gathered to witness him flagging off Kenya’s first petroleum exports.

President Kenyatta, who later addressed a public rally at Lokichar town, said  Kenyans should draw lessons from other countries that failed to manage their resources and ended up with suffering, hungry and poor citizenry.

Kenya started its journey into becoming an oil exporting country by laying down legislation to guide the sharing of revenue from petroleum resources.

The Petroleum (Exploration and Production) Bill sets the foundation for a revenue sharing formula between the national and county governments and the people.

Under the Bill, 75 percent of the revenue from the production and export of oil will go to all the Kenyan people through the national government. 20 percent will go to the county government of Turkana while 5 percent is reserved for the local community.

“Every Kenyan therefore has a stake in the development of the oil and gas sector and most importantly in the safeguarding of its resources,” said the President.

The law got endorsement recently after consultations between President Kenyatta and the leadership of Turkana County headed by Governor Joseph Nanok.

The President reiterated his call for amicable resolutions to any issues relating to resources.

“I call upon our leaders to ensure peace and stability in the region, and to ensure that any disagreements that might arise from this resource are resolved in an amicable and sustainable manner,” said the President.

Deputy President William Ruto said the Government has completed the construction of a technical and vocational training centre in Turkana East where youth will be trained in technology for petroleum industry.

“The construction is complete and equipment worth more than Sh50 million will be delivered within the next few weeks,” he said.

The DP urged the local residents to take advantage of the new institution so that local youth can easily gain employment with the petroleum companies.

The drilling of the oil is being undertaken by Tullow Oil in partnership with Africa Oil and Total.

The Chief Executive Officer of Tullow Oil, Paul McDade, who spoke at Ngamia 8 Oil Field where the President flagged off the first consignment, said it was a momentous occasion for Kenya as it joins the league of petroleum producing countries.

“This is a Wonderfull day for Kenyans and I hope to come back here when the President again opens the valve for exports through the pipeline,” said McDade.

A pipeline from Lamu to Lokichar will be constructed to coincide with the the full development of the oil fields. Before the completion of the pipeline, oil consignments will be transported by trucks to Mombasa for onward shipment.

The two governors said they are leading efforts to bring lasting peace in their counties.