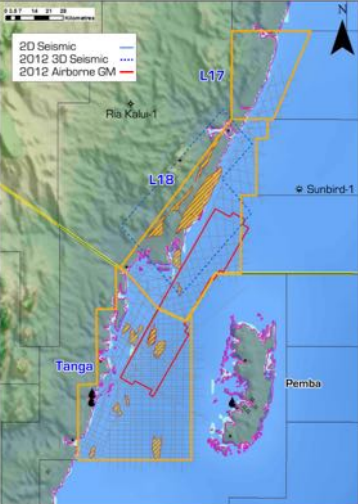 Kenya’s Block L17/18 operator Octant Energy will be drilling offshore the south coast by Q2 2019 ahead of expiry of the PSC valid until April 23, 2019 OilNews Kenya has learnt.

According to the source the well targeting the Wasin prospect which is expected to be drilled from an onshore well pad in the South Coast will combine both horizontal and vertical drilling technology with the well expected to reach a total depth of an estimated 3500 meters.

Octant’s Wasin prospect has an estimated P-Mean potential at 143 MBOE according to assessments by McDaniel & Associates Consultants Ltd.

Depending on the result the company has plans for a second well in the event of a positive result probably in Q2 2018 in the same block.

Octant is currently working on an updated Environmental Impact Assessment (EIA) for a
drill site from this new location.

Octant also hopes to commence 2D seismic over block 1 over the 1200 sq km surface anticline in El Wak area (the largest in East Africa still untested) in H2 2019 with drilling planned thereafter in 2020.

Work on this block has remained paused due to continued security risks in the region although the North/South road  being financed by the International Development Agency is expected to alleviate the security problems in the area.