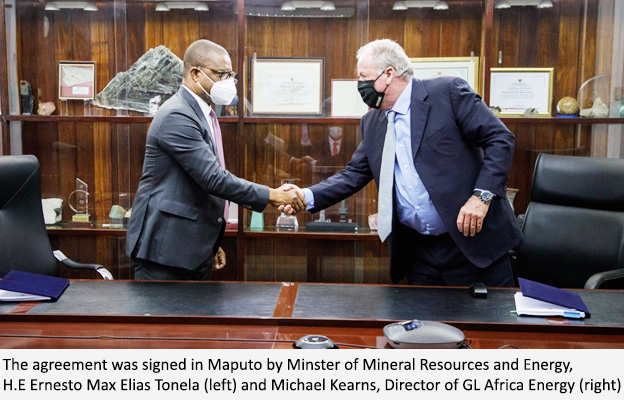 GL Africa Energy Mozambique and the Ministry of mineral resources and energy have signed a concession agreement for the finance and operationalization of the 250MW lng plant in Nacala district, Nampula province in northern Mozambique.

The agreement signed by minister Ernesto Max Elias Tonelo and GL Energy director Michael Kearns signals the start of a three-part phased investment producing 50MW in the initial phase within 16 months and 200MW in the second and third phase to be completed within 24 months.

GL Africa Energy will build and operate the plant once completed with the terms of the project and concession signed after approval by the Mozambique government on 7th October 2021.

The 30-year-old public-private partnership, a key pillar of the Mozambique gas strategy,  will see the Electricidade de Mocambique hold the public interest in the project and will also offtake the electricity generated.

The 400 million plant will accelerate the development and industrialization of several other industrial projects, which have been shelved due to the lack of a steady power supply. At 250MW, GLAE’s Northern Mozambique gas fired power plant will be one of the largest conventional sources of electricity in the country.

The construction phase will see over 300 employed and increase access to electricity in a country where approximately 40 percent of the population do not have electricity. Mozambique relies on coal, diesel and HFO to generate energy thus the new plant will see a reduction on this pollution causing energy supply method.

“We are delighted to take another step towards completing the Nacala LNG plant. Power and development go hand in hand and we are proud to play our part in supporting the communities of Nacala. This plant will ensure reliable power for tens of thousands of businesses and homes. It demonstrates the power of public and private collaboration. It is just the beginning of our long-term commitment to the country,” said Mamadou Goumble, CEO Energy Business, JCG.