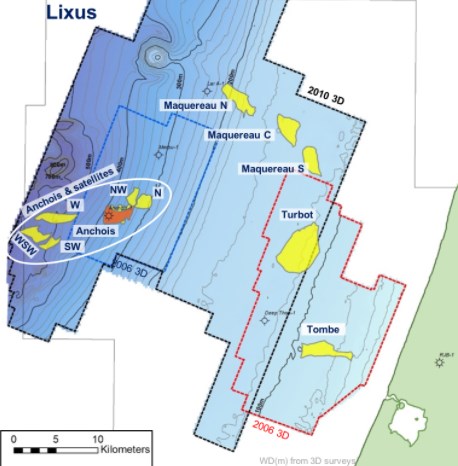 Chariot Oil & Gas Limited has announced that it has completed the reprocessing of 3D seismic data across the Lixus Offshore Licence, Morocco, resulting in significant improvements in both image quality and in depth control. This has had a positive
impact on the understanding of the distribution and extent of the Anchois gas sands.
Following the reprocessing of the data, Netherland Sewell & Associates Inc. (NSAI) has performed an updated Independent Assessment on a c.50km2 area, covering the Anchois gas discovery on the Lixus licence, which has led to a significant resource upgrade for the proposed Anchois Gas Field Development.

• Upgrade of audited total remaining recoverable resource to in excess of 1 Tcf for Anchois, representing a 148% increase (comprising 361 Bcf 2C contingent resources and 690 2U prospective resources)
• Ability for the low-risk prospective targets (C, M and O sands) to be drilled at low cost as part of any appraisal or development drilling activity on the Anchois Discovery (A and B sands); the development of which brings the potential for material free cash flow
• Chariot technical team continues to identify, evaluate and quantify additional material gas prospects in the Lixus licence based on  the reprocessed data

Adonis Pouroulis, Acting CEO, commented:
“The recent work on the Lixus Licence confirms the materiality of the Anchois Gas Field Development project. We continue to hold the view that this asset has the capacity to be a value accretive and long-term project of national significance to Morocco. The Anchois development has the potential to supply material gas volumes into existing markets in the near-term, and the exploration prospectivity of the Lixus licence is of a scale sufficient to provide the Moroccan power sector with a clean, reliable, low cost and sustainable supply of gas for decades to come. We continue to make progress in unlocking the Anchois development and generating near term cash flows and we look forward to keeping our shareholders updated on developments on Lixus and, as previously announced, the other opportunities being reviewed over the coming months.”

The Lixus licence covers an area of approximately 2,390km2, with water depths ranging from the coastline to 850m. The area has been subject to earlier exploration with legacy 3D seismic data covering approximately 1,425km2 on-block and four exploration wells, including the Anchois gas discovery.

The reprocessing of the legacy seismic data was performed by PGS. PGS delivered a reprocessed cube covering 1,735 km2 and with Pre-Stack Depth Migration (PSDM) technology applied for the first time, with the legacy data being Pre-Stack Time Migration (PSTM). With the completion of this project, and the subsequent generation of Seismic Inversion products, this now completes the minimum work programme on the Lixus licence

Chariot, through its wholly owned subsidiary, Chariot Oil & Gas Holdings (Morocco) Limited, has a 75% interest and operatorship of Lixus, in partnership with the Office National des Hydrocarbures et des Mines (ONHYM) which holds a 25% interest.