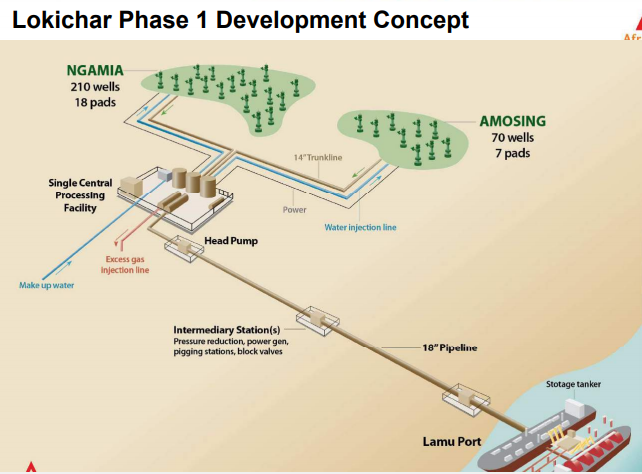 According to a report by Africa Oil the South Lokichar Developement phases include Phase 1 – Amosing and Ngamia Sweet Spots with a targeted production of 60 – 80k BOPD to utilise 240mmbbl while Phase 2 (contingent) western fields with an estimated 560mmbbl cumulative and phase3 (Contingent) of Northern Fields and Exploration Upside targets a production of between 100-120k BOPD.
The South Lokichar Development phase 1 targets a first oil date of 2021/2022 with the KJV is planning to reach a final investment decision of 2019.
Phase 1 targeting the Amosing and Ngamia oilfields plans to develop high productivity Auwerwer reservoirs in main fields and allows export pipeline to move forward to unlock basin potential with minimal upfront investment.Overall it is estimated that the KJV will need to inject just under $3 billion down from the earlier planned full western fields development estimated to cost $7 billion in April 2015.These costs include: wells, upstream facilities and the pipeline.
According to the phase 1 concept plan the KJV envisages 210 wells at the Ngamia field drilled from 18 pads and 70 wells at the Amosing field drilled from 7 pads and connected to the single central processing facility by a 14 inch trunkline. From the single CPF an 18 inch pipeline will evacuate oil (through an optimised route which can hopefully cut the distance by 50km)to the Lamu port where an offshore storage and loading facility is being considered with an estimated cost reduction of $150 million.Earlier an onshore tank farm located at Lamu and SPM loading facility had been envisaged.
Phase 2 rides on well and field performance which will allow additional phases to be better defined and funded primarily from cash flow resulting from the first phase. KJV further expects costs to be greatly reduced as pipeline and central processing facility will be in phase with incremental unit development planned thereafter. By phase 2 it is also expected that more marginal reservoirs and remote fields will become highly economic.
Among the cost saving measures foreseen include the deferring inter-field pipelines, excess water handling and development wells allowing additional time to upgrade resources including exploration volumes.Other measures that could be introduced include reduced insulation, electrical line heating and pumpstations, increased module and equipment size as opposed to many modules and equipments among others. The reductions could also include more development wells drilled from fewer wellpads. With the various cost reductions November 2017 show an initial development figures could drop to $1.3 billion to first oil down from 2.2 billion as per the April 2015 estimates.
The first phase according to the report is also expected to run between the first oil date and 2024/2025 before production for phase two kicks in with the timeline for production running beyond 2044 when the production license is expected to expire