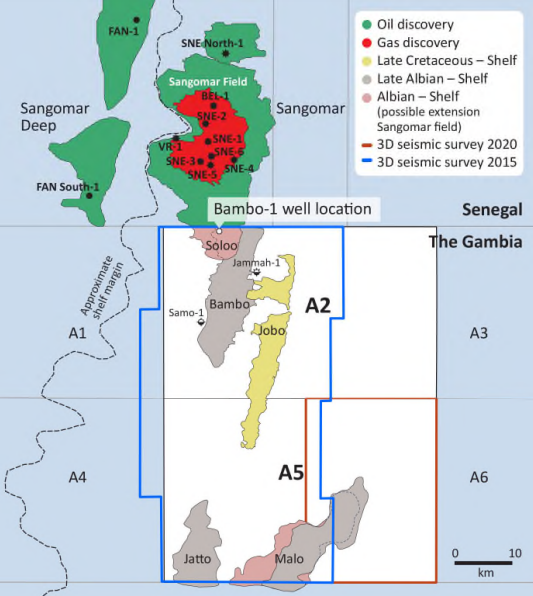 FAR concluded the drilling and formation evaluation operations for the Bambo-1 well and Bambo-1ST1 sidetrack well in Block A2, offshore The Gambia. Bambo-1 was initially drilled to a depth of 3216m MDBRT (measured depth below rotary table) and wireline logging data was obtained. The Bambo-1 well was then plugged and the Bambo-1ST1 (sidetrack) well drilled to a depth of 3317m MDBRT after which wireline logging was conducted.

Although no moveable oil was interpreted, the drilling and logging data obtained on the main well and the side-track well indicate that several
target intervals in the well had oil shows, confirming a prolific oil source is present in the area. Samples were recovered from several levels.
The presence or otherwise of any oil will be confirmed by laboratory analysis.

The side-track well was planned to be drilled to the final total depth through all target reservoirs and also to intersect zones of interest from the main well in a different location which will provide additional data and to sample potential oil. Interpretation of the cuttings and wireline logging information indicates that these zones have been charged with oil in rather poor-quality reservoirs and in traps that might have been breached, leaving behind some residual oils in the reservoirs.

The side-track well also intersected oil shows in the Soloo Deep units not previously encountered by the original well or other wells in the area. The oil shows encountered were persistent over several hundred metres, confirming access to the prolific oil-generative kitchen is present which may open additional material exploration opportunities and running room in both the A2 and A5 Blocks. Interpretation and integration of these data are
ongoing.

The drilling operations of the Bambo-1 well and Bambo-1ST1 side-track well were conducted safely and within the amended budget. The well and side-track have subsequently been plugged and abandoned consistent with the planned well abandonment program.

FAR is Operator and a 50% interest holder in the A2 Licence, offshore The Gambia in which the Bambo well has been drilled. The well fulfills the minimum work obligation of drilling one exploration well for the Initial Exploration Periods for both the A2 and A5 Licences.

FAR says it remains highly encouraged by the data collected in the Bambo drilling program and its implications for potentially large oil accumulations in Blocks A2 and A5 offshore The Gambia, which FAR currently has under license with partner, Petronas. The operator say it is accelerating the evaluation of the well results and looks forward to announcing a revised plan for exploration in the area in the coming months.