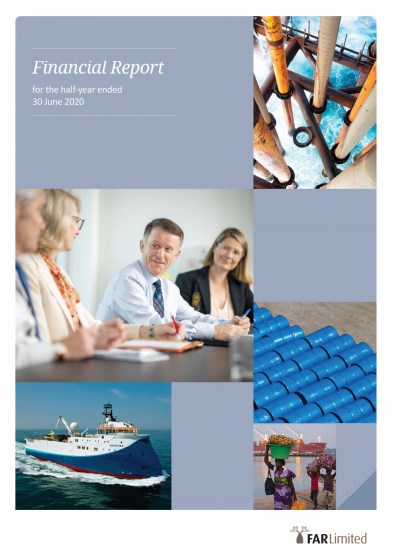 In Q2 2020 the COVID-19 pandemic and oil price collapse, resulted in the inability to close financing for the Sangomar Oil Field, offshore Senegal and the decision of the Group to sell this asset.

The additional exploration expenditure during the half is predominantly related to the Gambia project including the 3D seismic acquisition program over the A5 Block and the acquisition of additional 2D seismic in the A2 block and subsequent processing. The
foreign exchange loss was largely incurred on the conversion from AUD to USD of part of the equity proceeds raised in January 2020 for the purposes of funding the Senegal development expenditure.

The remeasurement loss on the Senegal development asset is the result of the Group applying the market value implied from the upfront cash component of the recent Cairn/Lukoil transaction subsequently pre-empted by Woodside (which resulted in a value less than that based on Woodside’s reported recoverable amount as per its half-year report).

Phase 1 of the development is planned to target 231 mmbbls of oil resources from the lower, less complex reservoirs, and an initial pilot phase in the upper reservoirs.

A high-definition 3D marine seismic survey across the SNE North and Spica area was completed in February 2020. Active preparation for the 23 well development and drilling campaign, targeted to commence in mid-2021, continued in Q2. Detailed engineering
progressed and long lead item purchase orders were awarded for major equipment. Processing of the high definition seismic survey over the Sangomar Field and FAN discovery was completed and interpretation of the data has commenced. As expected, the data shows a significant improvement in quality over the existing seismic and will be incorporated into development planning and resource assessment.

The COVID-19 pandemic and the falling oil price impacted FAR’s ability to finalise financing arrangements for its share of the development and as a result FAR made the decision to commence a sale process for all or part of its working interest in parallel with
investigating alternative sources of finance. At the date of this report, the Group is well advanced in a competitive sales process with third parties currently evaluating the acquisition of FAR’s Senegal asset. These parties are now in an advanced due-diligence stage, however the nature of the terms and likely valuation of any transaction are confidential.

In June FAR made the strategic decision to preserve the group’s cash and did not pay the June, and subsequent, cash calls. Accordingly, on 23 June 2020, FAR Senegal RSSD SA (a wholly owned subsidiary of FAR Limited) was notified by the Operator of the
RSSD Joint Venture that FAR Senegal is in default under the Joint Operating Agreement . FAR remains in default of its payments to the RSSD joint venture. The June, July and August cash calls are currently unpaid and total US$28,151,575. The estimated interest
accrued to date on these payments is US$93,882. Based on Operators latest forecast cash calls, the total amount payable at the end of November 2020 is estimated to be US$56,359,269 (excluding interest). The timing and quantum of future cash calls remain
uncertain and may vary from this estimate. Key points of the default provisions are:

In the event that the Group is unsuccessful in implementing the sale of its Senegal asset, such circumstances would indicate that a material uncertainty exists that may cast significant doubt as to whether the Group will be able to continue as a going concern and
therefore whether it will realise its assets and discharge its liabilities in the normal course of business and at the amounts stated in the financial report.

GAMBIA
During H1 2020, FAR completed a 3D seismic acquisition program over the A5 Block, which was conducted by Shearwater GeoServices. The program also included the acquisition of additional 2D seismic in the A2 block. The project was completed
efficiently and without any medical or environmental incidents. Processing of the new seismic data has also been kicked off with DUG Technology, which is aiming to increase the confidence of a number of prospects.

Good progress was made in early 2020 in preparing to drill the Bambo-1 well. Due to the COVID-19 pandemic and after consultation with the Joint Venturers and the Ministry of Petroleum and Energy, the project was placed into a temporary suspension mode. FAR
is reviewing the COVID-19 situation and potential risk mitigation options with a view to consider reactivating the project at the appropriate time in the future. The draft Environmental and Social Impact Assessment for the Bambo-1 well has been submitted to the regulators who have provided comments to be incorporated into the final document.

During H1, new Joint Operating Agreements in respect of the A2 and A5 Blocks were signed by the Joint Venture partners. This follows the granting of new Licences for those Blocks by the Government of The Gambia effective 1 October 2019.

GUINEA-BISSAU
The Sinapa and Esperanca licences are currently within an Extension period of the initial Exploration Term as provided for under their respective Agreements for Joint Venture Participation (AJVP) where a subsidiary of Svenska Petroleum Exploration AB (Svenska) is Operator of the Joint Ventures.

In Q2 the Operator extended the suspension plan for drilling Atum-1X indefinitely due to COVID-19. FAR is working with the Operator to help identify and protect the Joint Venture from any further cost exposures due to COVID-19 shutdown. Decrees in relation to Joint Venture licence extension requests have been drafted for formal submission to the Council of Ministers and to the President of Guinea-Bissau.

KENYA
FAR, through a wholly owned subsidiary, Flow Energy Pty Ltd and its co-venturers, Pancontinental Oil & Gas NL (Pancontinental) and Afrex Ltd (Afrex) a subsidiary of Pancontinental, agreed to surrender the Block L6 Production Sharing Contract. A Surrender and Termination Notice was formally issued to the Government of Kenya in late June. As requested by the Government, FAR has submitted a comprehensive PSC closure plan.