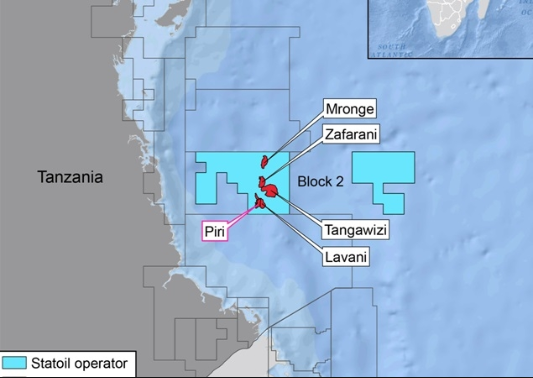 U.S explorer and world’s largest public listed oil and gas company Exxon Mobil is reported to be ditching Tanzania for neighboring Mozambique according to a report by Reuters citing three undisclosed banking and industry sources. According to the article Exxon Mobil plans to ditch offshore Block 2 in an attempt to free up cash and keep to the new CEO’s Darren Wood’s strategy to focus on the best prospects including Mozambique, Guyana and U.S shale.

Exxon Mobil which holds a 35 percent stake in Tanzania’s deepwater Block 2 field alongside Statoil with 65 percent has made discoveries totaling 23tcf including: Piri -1, Zafarani-1, Lavani-1, Tangawizi-1 and Mronge-1, and a discovery in Lavani-2.

Among other reasons for Exxon Mobil’s departure include delays in development due to lack of infrastructure.

Just last year Exxon Mobil acquired 25 percent of  area 4 from Eni in a transaction valued at $2.8 billion assuming responsibility for midstream operations. ExxonMobil will lead the construction and operation of all future natural gas liquefaction and related facilities, while Eni was tasked at leading the Coral floating LNG project and all upstream operations. The operating model will enable the use of best practices and skills with each company focusing on distinct and clearly defined scopes while preserving the benefits of an integrated project.