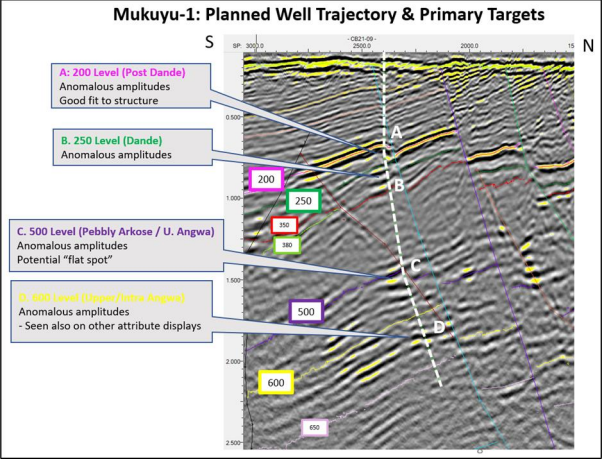 Since receiving all the final data processing deliverables from EarthSignal Processing in Calgary, Canada, Invictus has been interpreting the newly acquired seismic data of the 2021 Cabora Bassa 2D Seismic Survey, as well the concurrently reprocessed data of the 1990 legacy Mobil dataset.

The interpretation is now largely completed and Invictus is pleased to confirm the following key outcomes:
• The large anticlinal Mukuyu Prospect (previously named Muzarabani) has been confirmed with prospectivity, including extensive seismic anomalies identified at
multiple levels.
• Substantial new shallow target identified in the Post Dande horizon in Mukuyu
• A well location and a preliminary well trajectory has been developed for Mukuyu-1
which will target all key levels.
• 11 major seismic horizons mapped
• An extensive array of Prospects and Leads has been identified along the basin margin,
many of which are supported by anomalous seismic amplitude behaviour and the
interpretation is being matured.
• Invictus will continue to assess each of the basin margin prospects and select the most
suitable candidate to be drilled as the second well in the 2022 drilling campaign.

Substantial new shallow target in Mukuyu Prospect (previously Muzarabani)
A very positive and encouraging amplitude anomaly association for the Mukuyu Prospect has emerged from the new CB21 Survey data and the reprocessed vintage data. The previously identified Post Dande Lead A, which was evident on a single vintage seismic line (90-MZH013), has now been extensively covered by multiple lines from the CB21 Survey and revealed an additional and material shallower target in the Mukuyu Prospect at the Horizon 200 Level (Post Dande).

The extent of the amplitude anomalies (up to 16km along strike and 15km along dip) are
coincident with the greater structural closure at the Horizon 200 Level (Post Dande) and shown in Figure 1. The amplitudes terminate at approximately the same two-way time (TWT) across all the dip and strike lines which may indicate the presence of trapped hydrocarbons across the broader structure.

When these anomalies are extracted from along the interpreted horizon on which they lie, and then gridded and displayed as an overlay colour grid on the depth contour map for that particular horizon (200 Level), there is a remarkable fit to structure whereby the anomalous amplitudes, shown by the red colour in Figure 3, appear to extend down to, but not beyond the highlighted green contour.

This coincidence of anomalous amplitude with fit to structure is regarded as a very strong
attribute for any prospect and a potential Direct Hydrocarbon Indicator (DHI).

Furthermore, a Lambda-Rho seismic inversion display (Figure 4), which can be used to
distinguish rock and fluid properties, demonstrates gas prone indicators (lighter colours) which also shutoff at approximately the same two-way time across the structure.
However, it should be noted that the seismic data and amplitude anomalies are uncalibrated as the Cabora Bassa basin to date has not been drilled.

Planned Mukuyu-1 Well Trajectory & Targets
The Mukuyu Prospect (formerly Muzarabani) has been clearly delineated as a large, robust, 4-way dip anticline. This is most evident on the dip and strike lines inFigure 4. The positions of these seismic lines are referenced on the depth map for one the key target levels (the purple horizon 500 on the seismic lines in Figure 4) and the proposed location for the Mukuyu-1 well.

The extent of the Mukuyu closure is highlighted by the red contour on the depth map in Figure 4 and represents an area of approximately 200 square kilometres. All levels mapped show similar extensive 4-way dip closure.

A deviated well is being planned to test the Mukuyu prospect at multiple target levels along the well path on the southern flank of the structure as shown in Figure 5. Primary Target levels (A to D) are highlighted, however, there are potentially others that may not necessarily exhibit anomalous amplitude character.

The Mukuyu Prospect (formerly named Muzarabani) has been adopted to follow a new
prospect naming convention which takes after trees found in the project area. The Mukuyu tree is an indigenous sycamore fig whose canopy displays visual similarity to an anticlinal structure