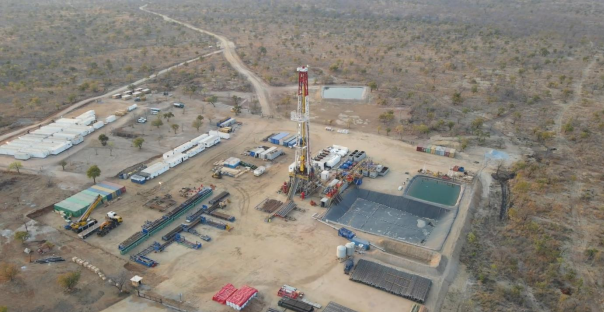 Invictus Energy has announced commencement of drilling at the Mukuyu-1 exploration well in SG 4571 commenced on Friday 24 September local time. Drilling will commence from the installed conductor at 67m to a planned depth of ~650m in the 17½ inch intermediate hole section.

The Mukuyu-1 well is designed to target several stacked Triassic and younger sandstones
within a 200km2 four-way dip closure on the basement high trend.
Mukuyu is one of the largest oil and gas exploration prospects to be drilled globally in 2022, targeting a combined prospective resource potential of 20 trillion cubic feet and 845 million barrels of conventional gas condensate, or about 4.3 billion barrels of oil equivalent on a gross mean unrisked basis#
.
Mukuyu-1 will be drilled to a projected depth of 3,500 metres. Drilling and evaluation of the well is prognosed to take approximately 50 to 60 days to complete.

Mukuyu-1 will be followed by the Baobab-1 well, which will test an independent play along the basin margin in the EPO 1849 block and take approximately 30 to 40 days to complete.

Baobab displays similar structural characteristics to the play opening Ngamia discovery in Kenya’s Lokichar Basin, which resulted in subsequent discoveries in the “String of Pearls” along the basin margin.

Invictus Managing Director Scott Macmillan commented:
“This is an exciting and long-anticipated moment for Invictus and our shareholders.
“Invictus, together with our partners, have methodically de-risked and matured the Mukuyu prospect and our Cabora Bassa acreage over the last several years and the commencement of our drilling campaign is a significant milestone.
“Mukuyu-1 is a world-class, basin opening well which, if successful, could be transformative for the Company and Zimbabwe.”