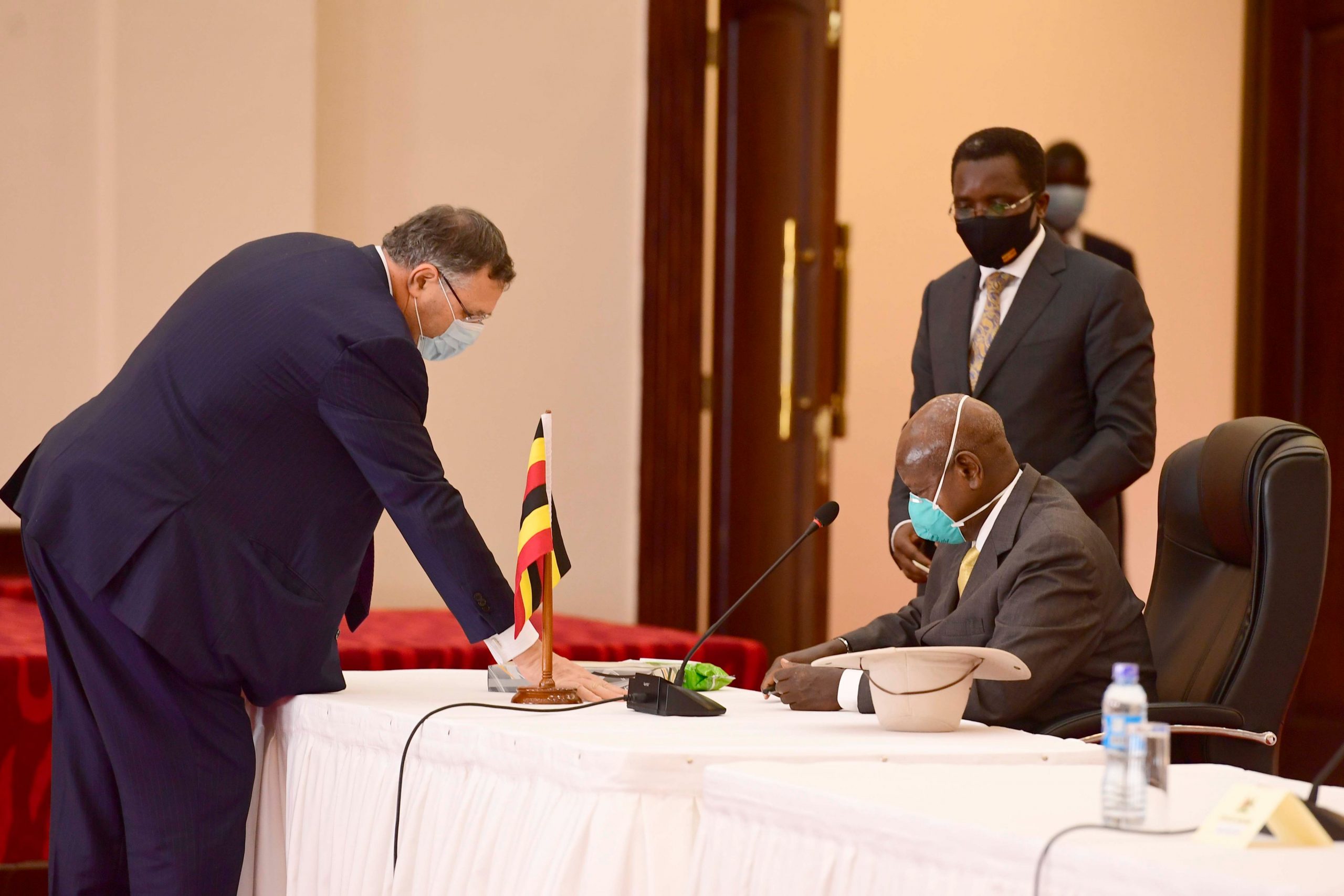 During a signing ceremony held yesterday in Entebbe, in the presence of Yoweri Museveni, President of the Republic of Uganda, Samia Suluhu Hassan, President of the United Republic of Tanzania, Patrick Pouyanné, Chairman and CEO of Total, as well as representatives of China National Offshore Oil Corporation (CNOOC), Uganda National Oil Company (UNOC) and Tanzania Petroleum Development Corporation (TPDC), the partners of the Lake Albert development project have concluded the final agreements required to launch this major project.

The Lake Albert development encompasses Tilenga and Kingfisher upstream oil projects in Uganda and the construction of the East African Crude Oil Pipeline (EACOP) in Uganda and Tanzania. The Tilenga project, operated by Total, and the Kingfisher project, operated by CNOOC, are expected to deliver a combined production of 230,000 barrels per day at plateau. The upstream partners are Total (56.67%), CNOOC (28.33%) and UNOC (15%). The production will be transported from the oilfields in Uganda to the port of Tanga in Tanzania via EACOP cross-border pipeline, with Total, UNOC, TPDC and CNOOC as shareholders.

The agreements concluded yesterday include the Shareholders Agreement of EACOP and the Tariff and Transportation Agreement between EACOP and the Lake Albert oil shippers.

These agreements open the way for the commencement of the Lake Albert development project. The main engineering, procurement and construction contracts will be awarded shortly, and construction will start. First oil export is planned in early 2025.

“This project should serve to awaken all Africans that prosperity & strategic security, are only possible if we use the Pan-Africanist approach that gives us a bigger market & rationalizes economic linkages, ” Uganda’s President Yoweri Museveni said during the signing of the EACOP project agreement.

“It has taken long before the first oil, due to divergent perceptions between us and the oil companies. Initially, I did not favor the idea of the pipeline. My question was: “Why export the oil. Don’t the East Africans need it?” In this, I preferred an Oil Refinery only. The oil companies, however, were biased in favor of exporting crude oil only. The compromise, then, was: “Ok, let us have both the Refinery and the Pipeline.” Most of this, was when the Tanzanian route was not in the picture. We were still debating about Mombasa and Lamu.”

“When the Tanzanian route of Tanga became more viable, a new consideration entered my mind ─ the historical role of Tanzania in the liberation of Uganda in both 1978/79 and 1985/86. On these two occasions, Mwalimu Nyerere played a very important role. Historically, there is this unique role of Tanzania. I am, therefore, most satisfied, that the project will make a modest contribution to the development of Tanzania. It cannot compensate for the huge sacrifice Tanzania made for us.”

All the partners are committed to implement these projects in an exemplary manner and taking into highest consideration the biodiversity and environmental stakes as well as the local communities’ rights and within the stringent environmental and social performance standards of the International Finance Corporation (IFC).

“The Tilenga development and EACOP pipeline project are major projects for Total and are consistent with our strategy to focus on low breakeven oil projects while lowering the average carbon intensity of the Group’s upstream portfolio. These projects will create significant in-country value for both Uganda and Tanzania” said Patrick Pouyanné, Chairman and Chief Executive Officer of Total. “Total is also taking into the highest consideration the sensitive environmental context and social stakes of these onshore projects. Our commitment is to implement these projects in an exemplary and fully transparent manner”.