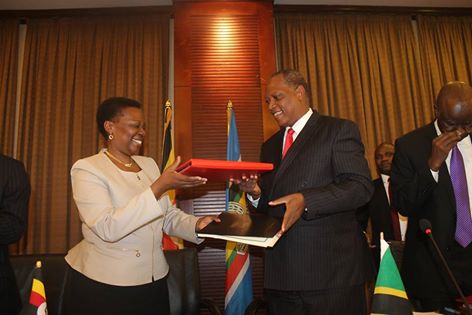 The Governments of Uganda and of Tanzania have signed the Inter-Governmental Agreement (IGA) for the East African Crude Oil Pipeline (EACOP) Project. The IGA was signed by Uganda’s Eng. Irene Muloni, Minister of Energy and Mineral Development and Tanzania’s Hon. Prof. Palamagamba John A.M Kabudi, Minister for Constitutional and Legal Affairs on behalf of their respective Governments.

According to Uganda’s Minister of Energy and Mineral Development Eng. Irene Muloni the agreement is the anchor to the pipeline project earlier signed between the presidents of both East African states.

“The bilateral negotiations for the IGA between the Republic of Uganda and the United Republic of Tanzania commenced in June 2016. The signing of this Foundation Agreement, upon which the implementation of the Project is anchored, is a major milestone,” Eng. Irene Muloni stated.

She added that the decision to select the Hoima-Tanga route as the least cost route for transporting crude oil from Uganda to the East African Coast (at an estimated tariff of US$12.2 per barrel) was premised on a fiscal incentives package offered by the Government of Tanzania which has been accepted by the Government of Uganda and all related discussions have been completed.

On his part, Prof. Palamagamba Kabudi, stated that the EACOP Project is a landmark for the two sister nations and that the Tanzanian Government is committed to working hard to expedite its implementation in order to open up the region for further opportunities for trade, and in turn fast track socio-economic development.

The EACOP Project consists of a 1445km, 24 inch crude oil pipeline that will be constructed from Hoima in Uganda to the port of Tanga in Dar es Salaam, Tanzania, a decision which was agreed in April 2016. It is in line with Uganda’s commercialization strategy for the discovered petroleum resources which provides for power generation, establishment of a refinery and export of crude oil.

The signing of the IGA provides a foundation for other project agreements, including Host Government Agreements, Shareholders’ Agreements and Financing Agreements, which will be entered into for the implementation of EACOP Project. In addition, Environmental and Social Impact Assessment together with Geotechnical and Geophysical Studies will be undertaken in both countries.

On behalf of the licensed oil companies, the General Manager of Total E&P, Mr. Adewale Fayemi expressed their commitment towards the continued progress of the project in the most efficient and professional way for the benefit of all Parties.

“The two East African countries have agreed to embark into what will be the longest electrically heated crude oil export pipeline in the world, another record happening in Africa,” he said.

The EACOP Project is in line with Uganda’s National Oil and Gas Policy and Tanzania’s Energy Policy that provide for promotion of development of suitable transport and storage solutions which give good value to the country’s oil and gas resources.