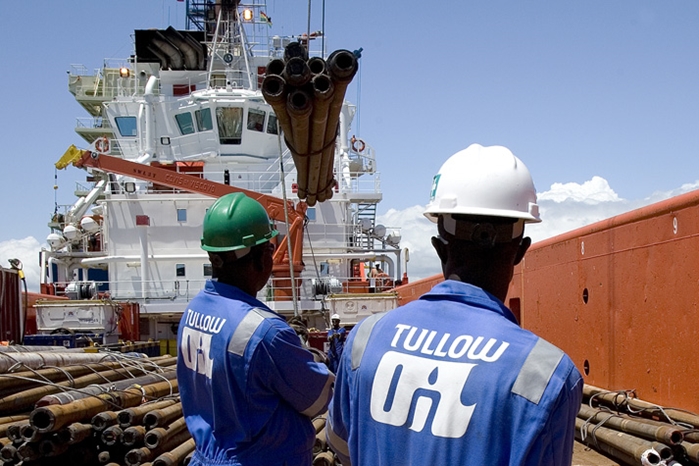 Production
Group working interest production averaged 77,700 bopd in the first half of 2020, in line with expectations. Full year guidance has been updated to reflect recent strong performance in Ghana, offset by production curtailments in Gabon due to OPEC+ quotas beingapplied. Overall, guidance for the full year is narrowed from 71-78,000 bopd to 73-77,000 bopd, with the mid-point forecast of 75,000 bopd maintained.

The impact of COVID-19 has been managed safely across the business with no adverse impact on Ghana production. This has been achieved in close cooperation with the Government of Ghana.

Production across both fields in Ghana has been strong in the first half of 2020 with the Jubilee field averaging 84,700 bopd gross (net: 30,000 bopd) and the TEN field averaging 50,900 bopd gross (net: 24,000 bopd). This performance is a result of increased gas
offtake nominations from the Ghana National Gas Company as well as approval from the Ministry of Energy to temporarily increase flaring, higher than forecast facility uptime of over 95% at both FPSOs and greater reliability and redundancy in the water injection
facilities on the Jubilee FPSO.

At TEN, the Ntomme-09 production well came onstream at the start of August 2020 and is contributing an incremental c.5,000 bopd gross oil production. The Maersk Venturer drillship has now been released. Tenders are ongoing to contract a rig to recommence
activity in Ghana in 2021.

The strong production performance has continued in the second half of the year with Jubilee and TEN averaging 90,000 bopd and 50,000 bopd gross respectively through July and August. This has been driven by continued high facility uptimes and strong well
performance across both fields including the Ntomme-09 well that came onstream in early August.

A comprehensive review of the investment and production optimisation plans for Jubilee and TEN, which are designed to realise the full potential of both assets and to maximise value for all stakeholders, is currently under way. This review is being conducted in
consultation with the Joint Venture Partners and is supported by expert advisors.

Production performance across the non-operated portfolio is expected to remain stable in the second half of 2020. However, in August, Tullow received notification from the operator of the Simba field that as part of Gabon’s requirement to comply with the
OPEC+ quota, the field would be shut in until the end of the year. This is expected to have a net negative impact on average annual Group production of approximately 1,500 bopd which is incorporated in the revised production guidance. The final outcome is
subject to change depending on how the Government of Gabon implement the quotas. Tullow are working closely with Joint Venture Partners to ensure any production curtailments are equitably shared.

In Mauritania, decommissioning of the wells in the Chinguetti field was
suspended following the Government’s decision to close the borders due to COVID-19 in March 2020.

Kenya
Tullow has been working with its Joint Venture Partners to progress the full field development plan. In May 2020 Tullow and its Joint Venture Partners declared FM on the Kenya licences. Following productive discussions with the Government, an improvement in the COVID-19 situation and assurances from Government that the tax incentives granted to the phased project will continue to apply, the FM notices were withdrawn in August 2020. Whilst these issues have resulted in a delay to the Final Investment Decision (FID) on the project, it has allowed time for both Tullow and its Joint Venture Partners to collaboratively work on realising the full potential of the assets.

Separately, the farm down process has been suspended while the Joint Venture Partners complete a comprehensive review of the development concept to ensure it continues to be robust at low oil prices, and also consider the strategic alternatives for the asset.

Following the announcement on 23 April 2020 that Tullow had agreed the sale of its assets in Uganda to Total for $500 million in cash on completion, $75 million in cash following FID, plus post first oil contingent payments, the transaction is progressing as
planned with completion expected before the year-end.

On 28 May 2020 CNOOC Uganda Limited informed both Tullow and Total that it had elected not to exercise its pre-emption rights.

On 18 June 2020 Tullow published the shareholder circular relating to the transaction and on 15 July 2020 a General Meeting was held, at which the transaction received approval with over 99 per cent of the 56 per cent votes cast in favour.

On 6 August 2020 the Government of Uganda provided their consent to the transfer of operatorship from Tullow to Total.

Completion of the transaction remains subject to the Government of Uganda and the Uganda Revenue Authority entering into a binding Tax Agreement with Tullow Uganda and Total Uganda that reflects the pre-agreed principles on the tax treatment of the
transaction, and the Government of Uganda approving the transfer of Tullow’s interests to Total. Good progress is being made in satisfying these conditions to completion.

Exploration
Tullow retains a high-quality exploration portfolio in both Africa and South America with high-potential opportunities. However, in light of the challenging external environment Tullow will be minimising exploration spend in the short term and looking at ways to
rebalance the portfolio whilst maintaining opportunities to realise value and preserve longer term options for growth.

Africa
Seismic acquisition in Côte d’Ivoire commenced in February 2020 but was suspended in April 2020 due to the impact of the COVID19 pandemic. The data collected during the early stages of the project is now being evaluated to decide on the next steps for the
basin.

In Namibia, Tullow is awaiting the outcome of the Venus-1 well which is expected to be drilled by Total in the fourth quarter of 2020 on a block to the south of Tullow’s PEL-90 acreage before deciding next steps.

During the first half of 2020 the Group recorded exploration write-off costs of $941 million which are predominantly driven by a write-down of the value of the Ugandan assets to the value of the disposal consideration as well as a write down to the value of the Kenya assets, principally associated with the reduction of the Group’s long-term oil price assumption and anticipated delay in FID. The remaining write-offs include Marina-1 well costs in Peru and the write-off of licence level costs associated with Peru, Comoros, Côte d’Ivoire and Namibia due to lower levels of planned activity and licence exits.