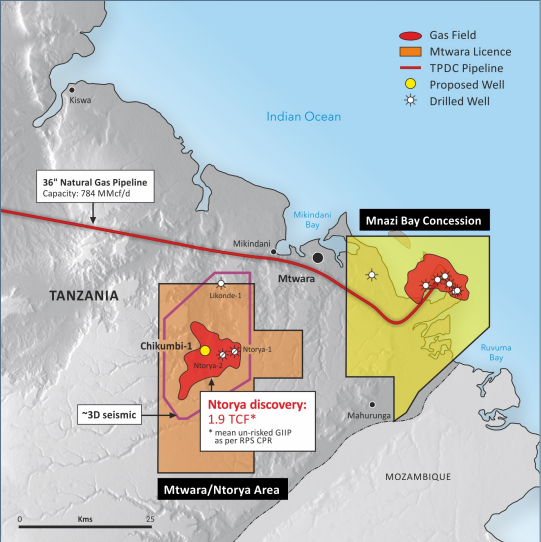 Following record production achieved in 2021, Wentworth and its joint venture partners continued to realize strong production rates throughout 2022,recording an average production rate of 92 MMscf/d year to date. The five producing wells in the Mnazi Bay field and the associated joint venture operated facilities continued to perform well and without issues. Furthermore, the reductions in natural gas demand typically seen during the wetter months, April and May, were less severe and shorter, compared to previous years.  The Company’s production guidance for the year, provided in January 2022, remains unchanged at 75 – 85 MMscf/d.

The Government of Tanzania remains positive in their recent announcements regarding their willingness to progress and promote projects of national interest and it is expected that these positive actions will continue to promote further growth potential for the Tanzanian economy.

With the Company’s recent agreement to acquire Scirocco Energy plc’s 25% interest in the Ruvuma PSA, Wentworth is pleased to report that work on the 338 km2 3D seismic, over the discovery and potential development area, is progressing positively and is intended to provide data critical to the development of the field and to optimize further drilling locations. The operator, ARA Petroleum Tanzania, has indicated that the Chikumbi-1 well will be drilled following the completion of the seismic programme and that first gas from the project is possible by late 2024, following the award of a 25-year development licence and construction of a pipeline connecting the field to the Madimba gas processing facility which is located within the Mnazi Bay licence area. The Company looks forward to updating the market as operations on this transformational new project progress.

· The Mnazi Bay JV Partners continue to progress the 2022 work programme, which is focused on ensuring reliable gas production through diligent field maintenance

· The health and safety of the employees at Mnazi Bay remains of paramount importance as is evidenced with our continued efforts to ensure robust health and safety standards. As of 31 May 2022, the Mnazi Bay operations have reported zero lost time incidents for a period of five years and 301 days

“I am delighted that Wentworth has made such a strong start to the year with production, supporting our full year guidance and providing the confidence to announce a further dividend increase and maintain our attractive yield, one of the highest in the independent E&P sector.

“Mnazi Bay continues to provide Tanzania with approximately half of the country’s natural gas demand and our contribution to the country’s growth will be further enhanced by our recently announced acquisition of a 25% stake in the nearby Ruvuma gas development project.

“Ruvuma is a transformational transaction for Wentworth and represents an attractively priced, low risk entry into a high growth opportunity which cements our position as a leading supplier of domestic gas to Tanzania.”