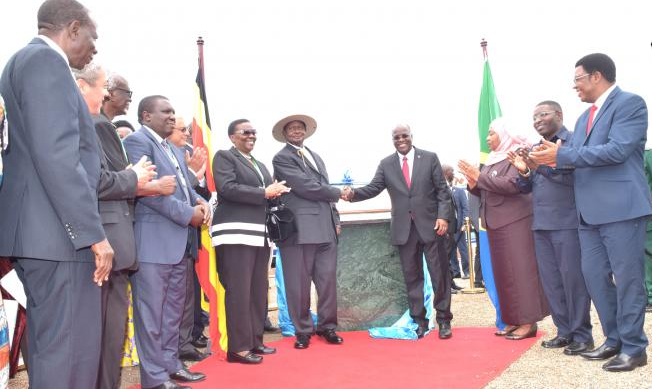 President John Maghufuli of Tanzania and host President Yoweri Museveni will on Thursday lay a cross border mark stone at Luzinga village in Uganda for the East Africa Crude Oil Pipeline. This follows the visit by the Uganda president to Tanga in February where the two state leaders laid a foundation stone.

The 1445km heated crude oil pipe line, the longest of its kind in the world, will cost $3.5 billion and will be completed by 2020 making Uganda join the ranks of oil producing countries. The pipeline works will be undertaken by Total E&P, CNOOC and Tullow Oil together with the two governments of Uganda and Tanzania. The pipeline will on completion carry 216,000 barrels of crude oil for export daily.

It is estimated that the cost of delivering a barrel of oil from Hoima to Tanga will be $12.2 per barrel following numerous concessions from the Tanzanian government making it profitable even at the current low prices.

In May the Governments of Uganda and of Tanzania signed the Inter-Governmental Agreement (IGA) for the East African Crude Oil Pipeline (EACOP) Project the anchor to the pipeline project earlier signed between the presidents of both East African states.

Standard Bank Uganda alongside Japan’s Sumitomo Mitsui Banking Corp. will be tasked with raising $3.55 billion required for the Hoima to Tanga pipeline after they were contracted by Uganda, Tanzania and French Oil giant Total who is also the lead joint venture partner on the crude oil export pipeline. Imperial Bank of China (IBC) on the other hand has been selected by joint venture partner China National Offshore Oil Corporation (CNOOC).

The EACOP Project is in line with Uganda’s National Oil and Gas Policy and Tanzania’s Energy Policy that provide for promotion of development of suitable transport and storage solutions which give good value to the country’s oil and gas resources.