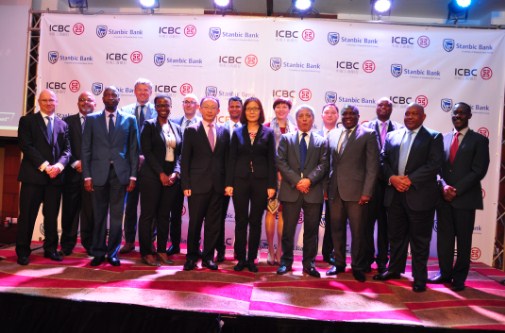 Stanbic Bank Uganda in collaboration with the Industrial and Commercial Bank of China Limited (ICBC), the world largest bank and most valuable bank by market capitalization, hosted an Oil & Gas Conference in Kampala that discussed partnership opportunities and encouraged greater cooperation between Ugandan and Chinese businesses in the country’s nascent Oil & Gas sector.

While delivering opening remarks at the conference Patrick Mweheire the Chief Executive of Stanbic Bank said, “Uganda stands at a critical point in its economic future, the confirmation of commercially viable quantities of Oil & Gas has created a lot of interest and could potentially be the game changer as far as the transformation of our economy is concerned. This conference will give companies from both countries an in-depth understanding of possible partnership opportunities, guide Ugandan businesses on what it will take to participate in the sector and give invaluable business insights from two financial giants who are uniquely placed to help them get ahead in the Oil & Gas sector.”

Stanbic Bank and ICBC have a longstanding relationship providing financial solutions for small and large companies doing business between Africa and China. This relationship was further cemented in 2007 with ICBC buying a 20% stake in Standard bank giving the two partners a much stronger bond and creating a unique linkage between the two markets. “Customers using Stanbic or ICBC are able access end to end trade and transactional solutions that improve business efficiencies, reduce trade turnaround times and minimize unnecessary third party costs.” Patrick noted.

Speaking about local content and need for greater cooperation between Ugandan and Chinese companies Mr. Ernest Rubondo, The Executive Director of the Uganda Petroleum Authority of Uganda revealed, that Government had already put in place policies and procedures that will ensure Ugandan companies actively participating in the sectors development. “As you to take on these opportunities I would advise you to look for international partners who have specialized skills and resources you might not currently have. This will allow you to scale up your operations a lot faster and take advantage of new business streams at a minimal cost.”

Talking about the role he expects Stanbic and ICBC to play in the development of Uganda’s Oil and Gas Sector Mr. Wang Lubin the Chief Representative Officer ICBC and board member of Standard Bank Group said, “ICBC and Stanbic Bank are very well placed to play a leading role in the development of the sector. We have already been working with Government and the companies who are executing a number of critical Oil related infrastructure projects and have vast experience working together on large scale projects across the continent. To date Standard Bank and ICBC have jointly financed deals worth about 15 Billion dollars between Africa & China.”

Uganda’s Oil and Gas sector is expected to attract investment of about 14 Billion dollars with the majority of the capital directed towards infrastructural development. These include the Uganda Tanzania crude Oil pipeline where Stanbic Uganda was recently appointed alongside Sumitomo Mitsui of Japan as joint financial advisors for the 1,445km pipeline. The two are expected to raise capital of 3 billion dollars for the project.  Ugandan President Yoweri Museveni and his Tanzanian counterpart John Magufuli commissioned the construction of the $3.5 billion pipeline earlier this month. “A lot of activities are going on, a lot of tenders are being made” and expectations are that the final investment decision for the pipeline project will be made in the first quarter of next year.” Mweheire concluded.