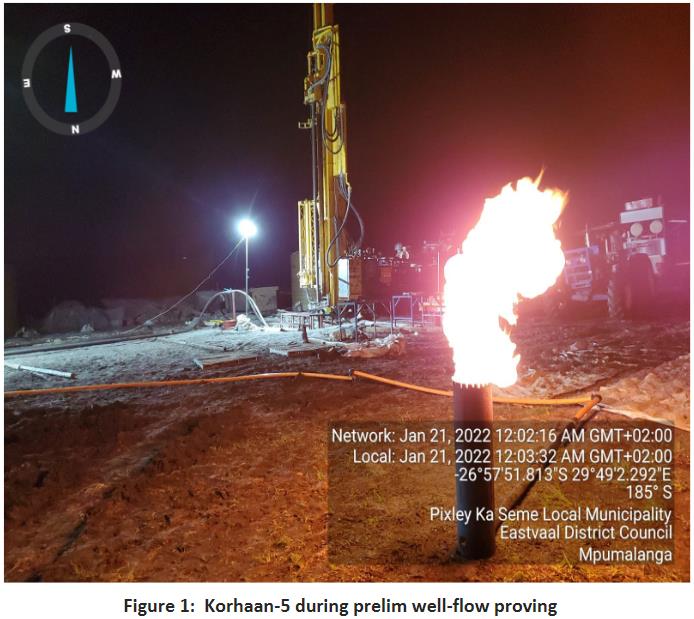 ‘The Company is exhilarated to see the success so far in the exploration undertaken on the Korhaan Project wells. With strong gas shows already observed, the flow testing of each of the three wells in coming weeks is anticipated to provide the platform for major milestones being achieved such as first production and booking of maiden reserves.’

Korhaan-5 has completed drilling of the Production Section from 150m to 432m, where TD was called due to the tight structures encountered. The well was immediately lined up to a flare line in order to ascertain flow potential. Preliminary gas flows were established under choked conditions with the drill string in the well, BOP closed on the pipe, and natural groundwater flowback. The well was successfully logged to pinpoint productive intervals over 22-23 January.

Korhaan-4: After a solid stabilization period, the well was cleaned out and filled with fresh water for logging. The logging strings included the following suites of tools: Gamma Ray. Conductivity, Pressure-Temp, Optical TeleViewer, Neutron, Density, Azimuth,Caliper.

The logs showed substantial cumulative gassy sandstone intervals. The well is being prepared for multi-day flow rate testing planned to commence next week.

Korhaan-3: Drilling was continued from 102m to 177m where Surface Section TD was called after substantial gas was encountered from the uppermost sands. The well was cased to 174m to mitigate pressure build-up behind the tubulars and was cemented on 23 January. After curing, we will continue to drill Korhaan-3 Production Section, expecting to TD and log the well by the end of January.

The observed presence of gas in Korhaan-3 continues Kinetiko Energy’s 100% success rate in its exploration and appraisal campaigns in South Africa.