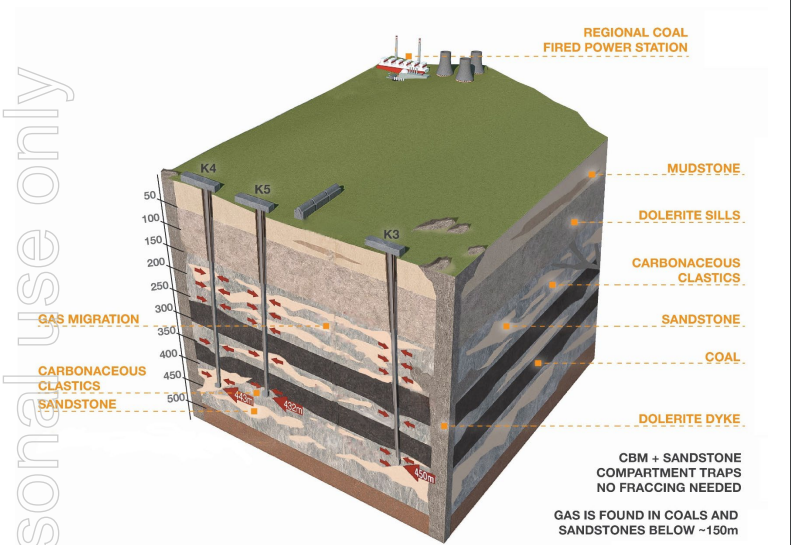 Korhaan-3: The TD of the Production Section was called at 449m after encountering tight formations. Gas was detected early at around 177m but showed strongly from 265m downwards, going off the scale of the inline meter (>10,000 ppm) from that point onwards. Early pre-logging test flows were very encouraging.

Well Testing: All three wells will now be flow tested, with long flow and shut-in periods envisaged to seek stability of rates and pressures with repetition for data confidence. Each well is expected to take 8-10 days to test, to ensure trustworthy information to assist our geological and economic modelling.

The operations were unfortunately suspended for two weeks after a severe thunderstorm resulted in a lightning strike on the wellhead at Korhaan-5 where the Company had the test rigup completed, which resulted in damage to the communications system to the downhole pump. Due to the need for replacement parts and transducers to be imported flow testing operations are expected to resume during the last week of February.

Drilling and logging that has been completed across the three Korhaan wells has indicated substantial consistency in the carbonaceous geology. With gassy production sections commencing at 130m (Korhaan 4), 150m (Korhaan 5), 177 (Korhaan 3) all three wells reached a very similar terminal depth between 432m and 450m. This provides the Company with greater confidence that further wells drilled adjacent to the Korhaan wells will intersect similar gassy geology.

The three Korhaan wells have been established over a small percentage of the first of 79 potential gas compartments identified so far by aeromagnetic surveys completed, illustrating the enormous potential for future drilling exploration success.