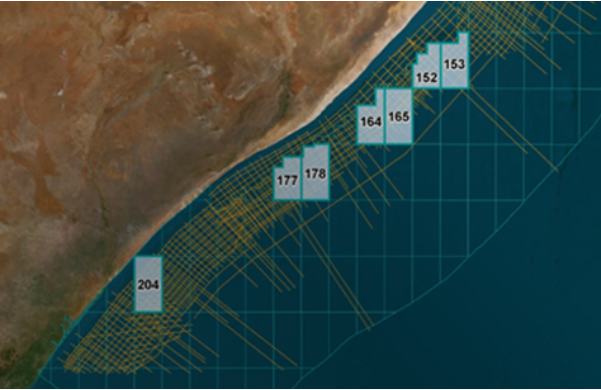 Coastline Exploration has signed seven Production Sharing Agreements (PSAs) covering offshore, deep-water blocks of the Federal Republic of Somalia. These PSAs enable Coastline to proceed with plans to explore for oil and gas on the many prospects and leads identified in these offshore blocks.

The announcement was confirmed by Somalia’s Minister of Petroleum & Mineral Resources H.E Eng. Abdirashid M. Ahmed on his official twitter account terming a victory for the Somali people.

We are pleased to announce that we have signed 7 Production Sharing Agreements with COASTLINE EXPLORATION LTD. It is a victory for the Somali people.
I thank the President of FGS for supporting the process and encouraging us to complete this task. pic.twitter.com/MZgyzotCXN

“This is a huge moment for Somalia  and I wish to congratulat the SPA for the significant progress it has made since its establishment in July 2020. It gives me great pleasure to sign the first of many PSAs that will accelerate our roadmap  of hydrocarbon exploration offshore Somalia. Exploratioj will be commencing soon which could lead to significant discoveries of hydrocarbons and the development of an important industry in Somalia and have a direct impact on our people,” H.E Eng. Abdirashid M. Ahmed said.

W. Richard Anderson, Chief Executive of Coastline, commented, “Somalia contains the largest remaining unexplored set of basins situated in warm waters in the world. We are honored and excited to be part of its future development. The Government of Somalia and the Ministry of Petroleum have spent a great deal of time and effort to ensure the country has the proper legal and administrative infrastructure to support oil and gas exploration with the passing of the Petroleum Law, adoption of the Revenue Sharing Agreement among the Federal Government and its Members States and the establishment of the Somali Petroleum Authority to provide continuing support for the anticipated growth in the sector.”

Jake UIrich, Coastline’s Chairman, continued “After a rigorous negotiating process, we are delighted to have signed these inaugural PSAs with the Somali Government. This marks a defining moment for the country. The way is now open for other oil and gas companies to join us in our quest for commercial discoveries through the current licensing round and, also through direct negotiations with the Somali oil and gas authorities. Revenues from the discovery of commercial quantities of hydrocarbons could be a major positive for Somalia from which the government could finance investments in education, infrastructure, healthcare and other vital services, which will benefit all of the people of Somalia, including women and minorities, by helping provide for continued economic growth and improving the standard of living.”

It is however unclear on whether the agreement stands with reports that Somalia’s President and PM had rejected the agreement with Coast Exploration. According to Somalia media outlets Farmajo declared the arrangement nullified just hours after it was announced.

The Presidency FGS hereby declares nullification of Petroleum pact signed by the Minister on behalf of FGS. The deal contravenes Presidential Decree 7/8/2021 which bans the inking of deals during elections so as to protect public resources from exploitation during the elections. pic.twitter.com/ATcFqUCw6g

The alleged production sharing agreement purportedly signed by the Minister of Petroleum with a foreign entity regarding Somali oil reserves is illegal, unacceptable since it wasn’t done through legal avenues.I will take all appropriate measures to protect our national resources

Hammering out deals on behalf of FGS during elections is in contravention of Presidential Decree (7/8/2021) which aims to protect public resources from exploitation to safeguard our national honor. The purported agreement by the Minister of Petroleum is illegitimate & repealed. https://t.co/sNs9GjMmMA

The signing ceremony was witnessed, amongst others, by the Chairman & CEO and Vice-Chair of the Somali Petroleum Authority who highlighted their desire for the expected economic and social benefits for the Somali people.

The signing follows the launch of the first offshore licensing round featuring up to 7 blocks covering over 30,000 square km which are estimated to be among the most prospective areas for hydrocarbon explorations and production in Somalia. Notably the blocks do not touch the disputed waters with Kenya  to the south which the country won by the International Court of Justice ruling in favor of Mogadishu recognizing a southeast facing border line.