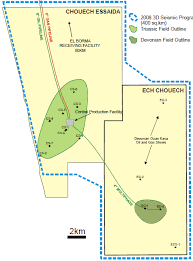 Serinus Energy has announced its intention to undertake an equity placement of approximately USD20 million. The Placing will be effected by way of an accelerated bookbuild, which will be launched immediately following the announcement.

The proceeds of the Placing will be used as part of a proposal to retire the EBRD Convertible Debt, and for the installation of the first pumps in a well work over programme for the Sabria field in Tunisia.

Background to and Reasons for the Placing
Serinus debt with the European Bank for Reconstruction and Development (the “EBRD”) dates back to 2013, which was structured in two loan agreements. The first was a Senior Debt Facility for USD40 million which was fully repaid and retired in September 2019.

The second loan was a Convertible Debt Facility  for USD20 million that is currently outstanding, plus accrued interest. During 2017, the Company’s operations experienced social unrest in Tunisia that stopped production at the Sabria field for four months and at the Chouech Es Saida field which was shut-in until the third quarter of 2019.

Serinus also experienced delays in first production from the Moftinu Gas Development in Romania that adversely affected the Company’s cash flow and its ability to service the debt at that time. Due to these unforeseen events, in 2017 the key terms
of the Debt Facility were renegotiated, including an extension of the term to 30 June 2023.

Since this time, the business has been successful in its operations, with the Sabria and Chouech Es Saida fields in Tunisia being brought back on production and the Moftinu Gas Project beginning operations in April 2019.

In early 2020 it became apparent with the onset of COVID-19, that the Company would not be able to service its debt repayments, and the Directors concluded that the capital structure of the business had become inappropriate for all stakeholders.

Serinus says its Directors have held discussions with the EBRD over a number of months and have reached an agreement to retire the Debt Facility, whereby the business will be free of debt, and the cash generated from operations can be invested in growing the business.

Terms of retirement of the Debt Facility
The EBRD has conditionally agreed to retire the Debt Facility and enter into a Deed of Release. In consideration the Company will pay to EBRD the sum of USD16.5 million immediately following Admission, and the EBRD will subscribe, at no cost, for
Ordinary Shares, representing 9.9% of the expected issued share capital at Admission.

The EBRD will have certain information and other rights and has agreed not to dispose of the EBRD Shares for 12 months following Admission. At 30 September 2020 the Company owed USD32.5million to the EBRD comprising USD20 million principal, and USD12.5 million in accrued interest.

Use of Proceeds
The net proceeds will be used to pay USD16.5 million to the EBRD as part of the Proposals, and for the installation of the first pumps in a well work over programme on the Sabria field in Tunisia.

Serinus has engaged the services of SGS to assist in the validation and design of an artificial lift programme in Tunisia. The Sabria field is a 358 mmboe Oil Initially in Place (“OIIP”) oilfield that to date has had a recovery of 1.2% of the OIIP.

The Company believes that this field is an excellent candidate for an artificial lift programme as to date no pumps have been installed in this field. Serinus intends to begin the installation of pumps into the Sabria field, a project that is predicted by SGS to realise
an incremental 3,960 boe/d of gross production.