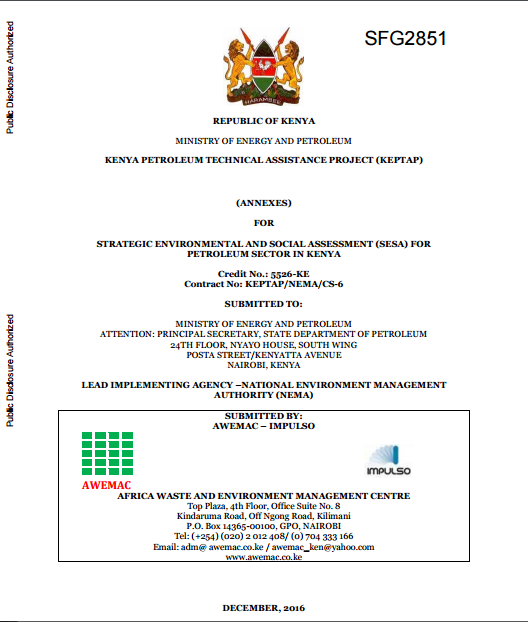 A recently released strategic environmental and social assessment initial report for the petroleum sector in Kenya shows a multitude of issues the country needs to solve to ensure a smooth transition from the exploration to the development and production phase.

On land the National Land Commission in a presentation done by the Kenya Land Alliance highlights that the common land in Kenya still lacks the legal property rights and that a proper compensation methodology needs to come in place with a looming inevitable displacement.

On the issue of minerals as a whole the commission cautioned against the attaching the value of land with the minerals with a need for a clarification as to whether the valuation would be done in terms of the value of the minerals or economic activities on the land.

Stakeholders also want a mechanism to compensate those deriving their livelihood from areas under oil exploration such as fishermen where oil and gas search is conducted onshore. They agree that there is a need for the improvement of livelihood in the adjacent community and that exploration should not make the communities ‘Miserable.’

“Any exploration is for development. No development if the resource will be extracted and make communities miserable. Improving of livelihoods should be key in any development then they will be able afford the basic needs.”

The Turkana county government through representation of the Chief Officer, Ministry of Environment and Natural Resources wants various environmental issues including flaring, issues of atmospheric impact, various diseases to animals and birds addressed through monitoring, regulations and control.

“It was reported that gas flaring in Twiga 2 was not done with the consultation of the local communities hence their animals were affected by the smoke. This is because there are no laws governing flaring in place especially from the companies concerned. ”

Other issues the county wants addressed include the physical destruction of the environment mitigated and proper plans laid out in case of an eventuality. The county also cautioned that land acquisition could result to conflict in society as the community is a ‘Tribal Level Society’

“Turkana land is communal. Land Level Society is where there are people coming from a common ancestor. The study needs to consider that. Then Tribal Level Society- whereby whatever is happens in the south affects the North and nobody will question the movement. Therefore, introducing land acquisition will bring conflict to the community.”

The National Museums of Kenya also a stakeholder noted that oil and gas explorations are in the Rift valley and Coast Region areas which fall under the gazzetted sites and their activities would be dangerous to the archeological sites resulting to the loss of sites and economic gains thus the need to work with exploration companies to see how the sites can be preserved.

On its part Tullow Oil while acknowledging the issue of fishermen was important noted that measuring loss of productivity for the fishermen was very complicated. The explorer also wants community land be provided with titles for easy compensation and compensation should be done based on traditional home tenue.

“Recommended that titling of community land to be made apriority for sustainability purposes but wondered on the extent it should be done without interfering with community lifestyle.”

On the refinery planned for Isiolo sub-county under the LAPSSET project there were concerns that Isiolo SubCounty has so many projects already and is a wildlife corridor hence the refinery should be moved to Garbatulla Sub- County because it is viable for producing electricity.The report further points to the fact that Isiolo sub county is a militarized zone with the KDF 78 Barracks hence proposed that the refinery must be located a way from the barracks due to radiation issues.

Stakeholders recommend there is need for public participation for all concerned in the counties and want the issue of minimal human resource capacities for the students in Isiolo County addressed before hand. There is also concern on the emergency preparedness and crisis management as the county does not have experience in regards to disasters in the oil sector.

To tackle this the recommendation therefore is the need for a MoU between the National Government and the County Government of Isiolo, capacity building for the youth and engage the services of the experts on Environmental issues.

The SESA Lead Consultant in his presentation said a framework will be created to address the concerns raised, need for harmonization of government agencies for better understanding of each other and need to understand the issue of local content as per the Kenya definition.

Following the release of the report the SESA Lead Consultant will be tasked with identifying the necessary changes in policy, legislation, regulations, guidelines among others as well as draft a plan for capacity building of existing institutions and offer recommendations and actions that will strengthen relations between all relevant stakeholders.National Environment Management Authority (NEMA) is the implementing body of the strategic environmental and social assessment

The consultant team to conduct the SESA will be an integrated team of local and international consultants and experts.

NB: A majority of facts in this article have been derived from minutes from the national scoping workshop held on Thursday, 30th June 2016 at the intercontinental hotel Nairobi a part of the report.