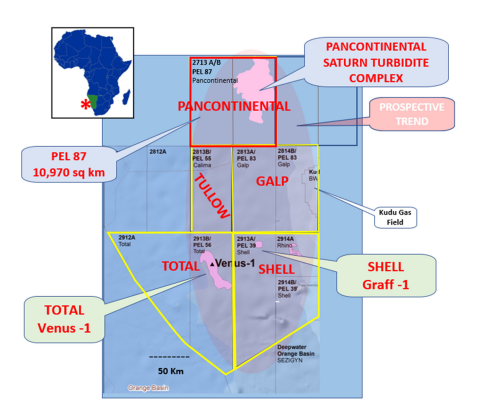 Shell has spud the Graff-1 well in Block 2913 Petroleum Exploration License (PEL) 39 State-owned Namcor reported, The well is being drilled at a depth of around 2000 meters using the Valaris DS-10 rig and comes days after Total Energies started drilling the Venus-1 well in the neighboring PEL 56.

‘We are sitting at the mouth of the Orange basin, it is a major delta system with all the plays that you typically can expect in a delta system. This looks exactly like (some) huge discoveries that have been made (elsewhere). I think we are on to a world-class, prolific mixed turbidite-contourite system that should soon be drilled,” Shell said in a statement.

“This is quite a milestone for us and the country as a whole and [we] look forward to the well results,” Namcor said in a statement.

NAMCOR, along with it’s exploration partners Shell Namibia Upstream B.V. (Operator) and QatarEnergy are proud to announce the spudding of the Graff-1 exploration well in Block 2913A, Orange Basin, offshore Namibia. This is quite a milestone for us and the country as a whole! pic.twitter.com/b7ju07mvew

Shell and Qatar Energy each have 45% interest in the block, while Namcor has 10%.

The drilling of the two wells is being observed by neighboring companies will planned  drilling including Pancontinental which plans to drill Saturn-1 well in PEL 87.

‘This is a very exciting time for Pancontinental, with the huge oil potential of our Saturn turbidite complex in PEL 87 being drilled on-trend by Shell and Total. These wells are recognised worldwide as two of the most important oil exploration wells of the year. Total’s Venus-1 well spudded recently, and now Shell has started its Graff-1 well. Pancontinental’s Saturn turbidite complex is geologically similar in many ways, particularly to the Venus Prospect. These turbidite plays are like very large oil fields elsewhere in Africa, triggering significant interest in offshore Namibia from major oil companies and Africa specialists. In this prime region, drilling success could open up a complete new African oil play’.