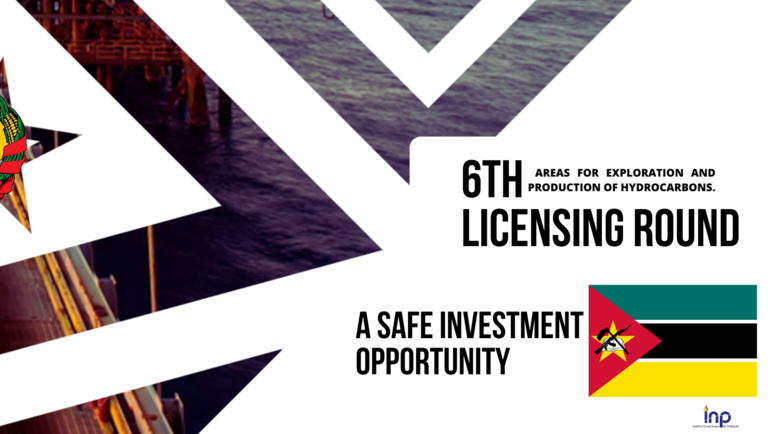 The Sixth Licensing Round for the Concession of Hydrocarbon Exploration and Production Areas is launched this Thursday, 25th of November. For this purpose, 16 new areas were defined, distributed by 4 distinct regions, five of which are located in the Rovuma Basin, seven in Angoche, two in the Zambezi Delta and two in Save, totalling more than 92,000 km².

This tender, which has a term of approximately 10 months, from the launch date until the results are announced in October 2022, comes about three months after the approval of the new Strategy of Concession of Areas for Exploration and Production of Hydrocarbons, which provides the basis for ensuring continuous and systematic exploration of hydrocarbons in the Mozambique and Rovuma basins, promoting national and foreign investment, as well as reducing the time between the holding of public tenders for the concession of areas to 2 years, as opposed to 3 years under previous legislation.

“With this tender we intend to assess the national petroleum potential and the resources discovered will be made available to society to drive Mozambique’s socio-economic development,” said Carlos Zacarias, Chairman of the INP, when asked about the tender’s objective. Another aspect referred by Zacarias is the fact that the global energy sector faces several challenges such as energy transition and the need to use renewable and clean energies such as natural gas, which is Mozambique’s energy potential, to contribute to new approaches for the development of the energy sector in the long term.

The launching ceremony of the Sixth Round for the Concession of Hydrocarbon Exploration and Production Areas will be addressed by the Minister of Mineral Resources and Energy, Ernesto Max Tonela, and will have as background the disclosure of the evaluation criteria and other relevant information for the pre-qualification of the bidders and consequent award of the 16 areas mentioned above.

Those interested in taking part in the online bid launch ceremony, which opens at 10.00am on 25 November 2021, can do so via the following link https://n9.cl/5kwro.

For any further information, please contact the National Petroleum Institute, Rua dos Desportistas Nº.259, Maputo City, on 21248300 or 839511000. You can also write to comunicacao@inp.gov.mz for general questions and inquiries relating to the Sixth Round, please direct your questions to 6th.concurso@inp.gov.mz  .