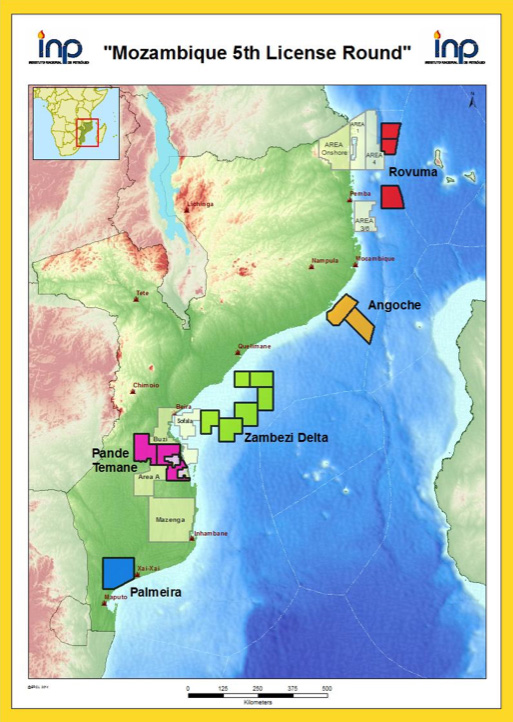 The Mozambique’s government has approved exploration contracts to various international companies awarded blocks during the 5th Competitive Bidding Round in 2015 after four years of delays.

The companies which include: N-Exploration (100% Rosneft subsidiary) and ExxonMobil Exploration and Production Mozambique Offshore which were awarded 3 blocks (A5-B in the Angoche Basin and Z5-C and Z5-D in the Zambezi Delta), Eni and Statoil which won Angoche Area A5-A, Sasol Petroleum for Pande/Temane Area PT5-C and Delonex Energy Ltd which got Palmeira Area P5-A.

According to Cabinet spokeswoman Ana the companies are now able to go ahead with exploration activities as part of the First Period of Exploration which includes FTG, 2D seismic among others.

The announcement follows an earlier announcement by Russia’s top diplomat Sergey Lavrov that Rosneft and ExxonMobil will sign an Exploration Production Concession Contract with the Mozambique government for blocks A5-B in the Angoche Basin and Z5-C and Z5-D in the Zambezi Delta following discussions with Foreign Minister of Mozambique Jose Pacheco and Rosneft’s management on developing the gas fields in the north of Mozambique.

Earlier this year Norwegian explorer Statoil has said it would no longer engage with Mozambique on acquisition of the offshore Angoche Area A-5 Block citing lack of progress since talks began in 2015 after they were awarded the license following the first licensing round. The other joint venture partners Eni through its subsidiary Eni Mozambico (operator),Sasol and ENH are however allowed to continue with negotiations.