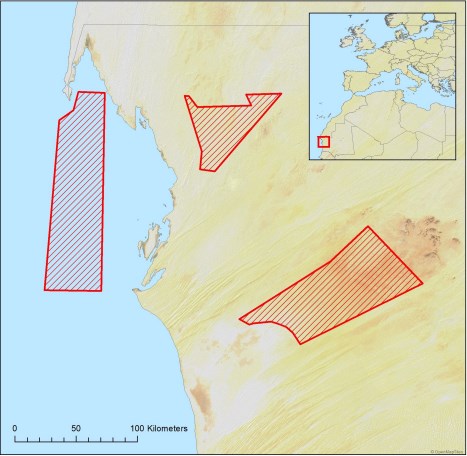 The Government of Mauritania, through the Ministry of Petroleum, Mines & Energy and Chariot  have signed a Memorandum of Understanding to progress a potential green hydrogen development, denominated as “Project Nour”, of up to 10GW.

• Project Nour has been given exclusivity over an onshore and offshore area totalling
approximately 14,400 km2 to carry out pre-feasibility and feasibility studies with the intention of generating electricity from solar and wind resources to be used in electrolysis to split water to produce green hydrogen and oxygen. The traditional method for creating hydrogen splits natural gas into hydrogen as well as carbon dioxide, a contributor to climate change.
• Chariot to deploy its in-house team who have a track-record of successfully delivering large renewable projects in Africa to immediately commence work on assessing the wind and solar resources, environmental impact as well as macroeconomic and social impact studies.
• Benefiting from Mauritania’s world class solar and wind resources, Project Nour has the
potential to allow Mauritania to produce the cheapest green hydrogen in Africa and to become one of the world’s main producers and exporters of green hydrogen and its derivative products, close to potential large European markets.
• These products have the potential to replace traditional fossil fuels in both power generation and chemical manufacturing processes, with a significant reduction in associated emissions of greenhouse gases such as carbon dioxide.
• Intention to carry out partnering process on the project with the objective to form a worldclass consortium.

H.E Minister Abdessalam Ould Mohamed Saleh of Mauritania’s Ministry of Petroleum, Mines & Energy, commented:
“Developing Mauritania’s green hydrogen industry promises to bring a combination of environmental, economic and social benefits to our country. We have the potential, and desire, to be a world leader in the field of hydrogen production from renewable energy sources. The Ministry is pleased to have signed this agreement with Chariot and hopes for a long and rewarding partnership.”

Adonis Pouroulis, Acting CEO of Chariot, commented:
“I am very excited by today’s announcement of this agreement with the goal of quickly realising the potential of green hydrogen. In Mauritania, Chariot has a history of previous significant investments and bringing in world-class partners to projects, and we are looking forward to working with the Government of Mauritania  again to fast-track Project Nour.
This is a potential large new market, set to bring multiple benefits to all parties and deliver positive impact to Mauritania. We thank the Government of Mauritania for the opportunity to partner with them on what we believe will be one of Africa’s largest projects of its kind and look forward to providing updates regarding the
near-term pre-feasibility study and beyond.”