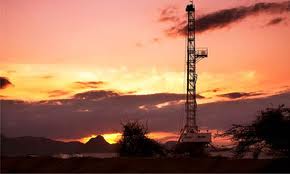 Kenya will start oil production before its neighbour Uganda according to Tullow Oil discovered having announced its first oil discovery six years after its western neighbour.

Tullow Oil together with its partner Africa oil say that talks are on course with the Kenyan government for it to start field development and export pipeline as early as 2015.

Tullow in a presentation says that Kenya which sees production and exports as a national priority could in the next six years be pumping as much as 50,000 barrels a day with first production expected as soon as 2016 two years ahead of Uganda’s planned 2018 export.

“They see it as a project of national priority and they are very focused on getting first oil from Kenya as soon as practical, but doing it properly. They recognize that the pipeline from northern Kenya to the coastline is the critical path, and they are in a strong dialogue with us,” Bloomberg quotes Chief Operating Officer Paul McDade in a presentation to investors in London.

Tullow Oil thus says it will be focusing more on Kenya rather than Uganda saying they see more business opportunity there where it says the government has shown really interest in the process going forward.

This recent revelations comes even as Wall Street journal this week reported that Tullow could be considering selling its stake in Uganda as the government is not supportive with the project being delayed for years.

Kenya “will be easier to develop and the government is very enthusiastic for us to get under way with that development and get first oil as soon as possible. So as we look at the phasing of our investments there’s a lot of priority being given to Kenya. If it continues to be very material and grow then we may look to modify our holdings in Uganda,” Paul McDade said in a telephone interview.

Kenya’s resource estimates following the last discovery in Amosing and Ewoi wells in Turkana shows Kenya currently has more than 600 million barrels with the explorers expecting estimates to surpass 1 billion barrels as soon as it completes ongoing oil drilling.