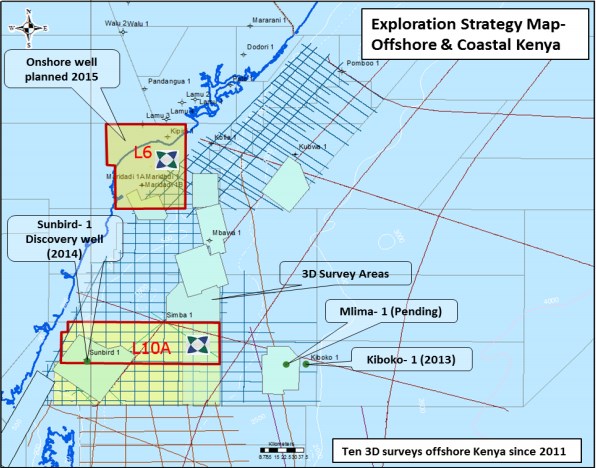 Eni has spud the Mlima-1 offshore well in Block L11A off Kenya’s south coast county of Kwale using the Saipem 12,000 drillship, OilNews Africa can confirm. The Eni led joint venture which includes TotalEnergies and Qatar Energy spud the well on 28th December 2021 at a depth of 2560m at a well site is located around 200km from Msambweni.

According to a source, the well will take approximately 40 days to complete thus an announcement is expected anytime starting February 2022.

“I am pleased to confirm that we did spud the Mlima-1 well in December and we are very hopeful,” the source told OilNews Africa.

The Mlima-1 well joins a series of offshore wells that are drilled around the continent including the TotalEnergies led Venus-1 well being drilled in 3,000m water depth by the Maersk Voyager drillship offshore Namibia and the Shell-led Graff-1 well offshore South Africa. The Bambo-1 well offshore the Gambia completed in December did not encounter oil or gas and has been plugged and abandoned.

The spudding also breaks a seven-year break of drilling from the Kenyan coast since the drilling and announcement of the first oil discovery offshore at the Sunbird-1 well by BG Group in Block L10A. Mlima-1 is also located about 20 km west of the well Kiboko-1 drilled by Anadarko in 2013 and classified as dry.

A 500 m safety zone around the drillship is being maintained with a standby vessel to be used to patrol the area to ensure that other vessels adhere.