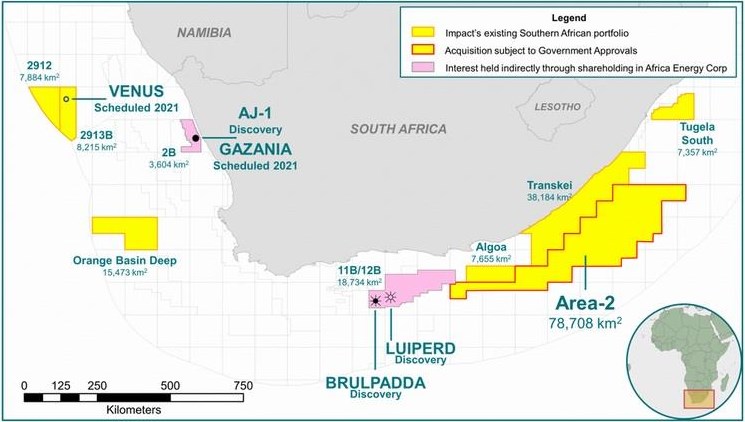 Impact Oil & Gas Limited has announced the completion of the farm-in transaction between its wholly-owned subsidiary, Impact Africa Limited and Silver Wave Energy Pte Ltd for the acquisition of a 90% working interest and operatorship of Area 2, offshore South Africa (Exploration Right reference 12/3/276).

Following receipt of approval from the Government of South Africa, Impact now owns a 90% working interest and operatorship of Area 2 with effect from 14 May 2021.

Philip Birch, Exploration Director of Impact Oil & Gas, commented:
“We are pleased to have concluded this transaction with Silver Wave Energy for Area 2 in deep water South Africa. This acquisition consolidates Impact’s position along the transform margin of the South African Natal Trough, adding over 78,000 km2 of acreage. Importantly, when added to Impact’s Transkei & Algoa licence, this captures the full length of all the large deep marine fans in the Natal Trough, which Impact believes to be a potential super-basin. This combined position offers substantial running room, with multiple play types underlain by very thick and oil-mature Cretaceous source rocks.”

Area 2 lies within the emerging Southern African Aptian deep water oil and gas play, stretching from northernmost Namibia, around Cape Agulhas and the Natal Trough, to the Durban Basin in the north-east. This play was opened up by the Brulpadda and Luiperd discoveries in the Outeniqua Basin and will be further tested during 2H2021 by the Venus-1X well in ultra-deep-water Namibia, where Impact is a substantial partner.