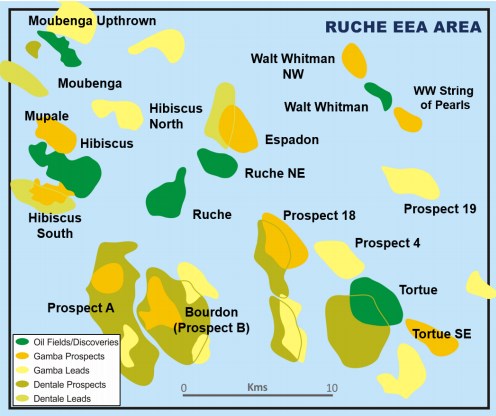 BW Energy Limited is pleased to announce the re-start of a three-well drilling campaign on the Dussafu license offshore Gabon consisting of two exploration wells in the Hibiscus area and one production well on the Tortue field. The Borr Norve jack-up rig has been contracted for the campaign.

The current campaign will start with the Hibiscus Extension appraisal well (DHIBM-2) which is located about 56 km from the coast in 119 m water depth. The well is planned as a vertical well to test the northern extension of the Gamba reservoir of the already discovered Hibiscus field. If the well is found to be hydrocarbon-bearing, one or two appraisal side-tracks may be drilled to further delineate the field.

The appraisal well will provide new input to the ongoing Hibiscus/Ruche development project, which is currently based on the already discovered 46.1 million barrels gross 2P reserve at Hibiscus and the 24.1 million barrels discovered at Ruche and Ruche North East. The development project is planned to consist of a converted jack-up rig tied back to the FPSO with 12 development wells drilled in two phases, with first oil expected in Q1 2023. The additional reserves at Hibiscus, if proven by DHIBM-2, may lead to relocation of the first converted jack-up and the potential deployment of a second converted jack-up to fully exploit the resources in this prolific area of Dussafu. The timing of the first oil from the area would not be affected.

“We are excited to begin the next phase of exploration drilling on the Hibiscus field. The Hibiscus Extension is our largest current prospect and has already been de-risked by the nearby discovery from 2019 and subsequent 3D seismic work. Working closely with the Government of Gabon and our license partners, we are looking forward to unlocking the full potential from Hibiscus and continue our development of the successful Tortue field through this drilling programme. The company expects to generate material cash flow over the next decade from the continued development of Dussafu and to deliver significant value to Gabon and the license partnership” says Carl K. Arnet, the CEO of BW Energy.

Following the DHIBM-2 well, the rig will move to drill the horizontal production well, DTM-7H, at the Tortue field. Once DTM-7H is completed and hooked up along with the previously drilled DTM-6H well, this will complete the phase 2 development of Tortue and will bring the total number of producing wells at Tortue to six wells.

The rig will subsequently move to drill the Hibiscus North prospect, located approximately 6 km north-northeast of the DHIBM-1 well. Hibiscus North is a separate prospect with estimated potential reserves of 10 to 40 million barrels of oil which could further enhance the resource base of the Hibiscus/Ruche area.