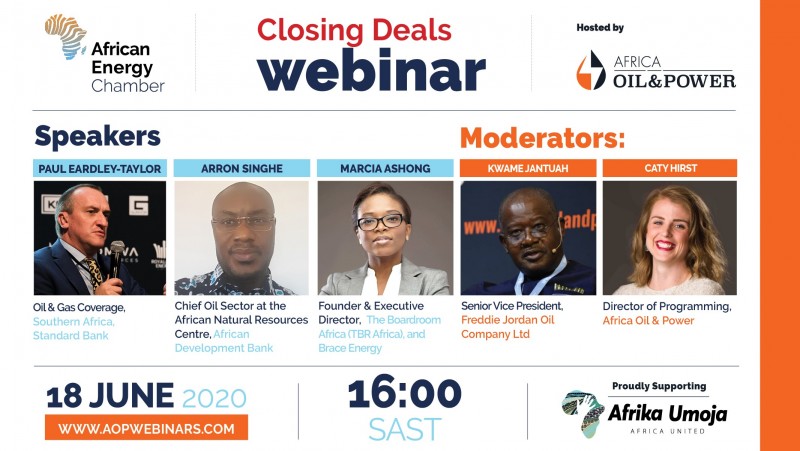 Hosted by Africa Oil & Power and the African Energy Chamber, the ‘Closing Deals: Advancing FID During COVID-19’ webinar addressed the prioritization of energy projects in an environment of limited capital investment; Natural gas developments are facing fewer delays in FID than oil exploration and production projects.

‘Closing Deals: Advancing FID During COVID-19,’ a public webinar held on Thursday, explored the future of deal-making and African energy financing in the short- and long-term, following the unprecedented impact of COVID-19 on the sector.

As operators continue to face uncertainty and a low-price oil environment, a range of survival strategies have been employed in the short term, including halting non-essential activities; adopting furlough or layoff strategies; slowing output; refining sales and purchase agreements and utilizing financial hedging instruments to market crude.

In the long term, however, COVID-19 will necessitate a reassessment of project development plans, many of which carry operating costs incompatible with a $40-barrel price.

“We are in unchartered waters. The IMF is estimating a 3% reduction in global GDP for 2020. The effect is almost triple to that of the 2008 financial crisis,” said Marcia Ashong, Founder and Executive Director of TheBoardroom Africa and Brace Energy. “Africa remains largely a commodity-based economy, and raw materials make up one-third of the continent’s export income. The road to recovery will be extremely slow and arduous. The full effect of COVID-19 on our economies is not fully recognized yet. From the oil and gas perspective, it has derailed major projects. For example, the Aker decision in Ghana [to postpone FID] will postpone further work on its Pecan discovery.”

While the financial viability of oil exploration and production projects has been called into question against a low barrel price, natural gas monetization projects appear to tell another story. In February, Total announced that its Mozambique LNG project is still on track to come online before 2025.

“There has definitely been a difference between oil and gas globally. In oil, COVID-19 has impacted mobility, and demand dropped as low as 72 million barrels in April,” said Paul Eardly-Taylor, Oil & Gas Coverage, Southern Africa, Standard Bank. “Bizarrely, in the world of liquefied natural gas (LNG), things have been a bit different. As of last week’s IA report, LNG demand was up 8.5% year-on-year globally. That is feeding through to Africa. For an African project [Total’s Mozambique LNG] to raise $15 billion in debt financing in the middle of COVID-19 is an astonishing achievement. With no material second wave occurring and from an energy perspective, the world could be right side by the end of the year. Hopefully 2021 will be Africa’s 2020.”

In terms of FIDs on the continent, only a few definitive delays have been encountered. In Mozambique, ExxonMobil has indefinitely delayed FID on its natural gas project in the Rovuma basin. In Uganda, FID taken by Total for the Tilenga project has been postponed until 2022, while initially planned for the end of 2019.

“We are seeing that if your project is squarely in the energy transition, at worst, it will be delayed by a year or so,” said Eardley-Taylor. “Mozambique is case-in-point. ExxonMobil is even expected to go ahead next year once it has secured a cheaper EPC price. Of the projects that are traditionally funded in Africa and are in the headlights of the energy transition, to what extent can they be achievable and fundable? In Uganda, there has been a strong alignment between stakeholders and lead sponsor Total. There is every expectation that even an onshore oil project with a long ride to the coast may take FID in the coming months or year.”

The lending behavior of financial institutions will also be impacted by the environmental dynamics of projects, with access to attractive funding terms and project development support then further driving the shift to renewable energy investments.

“The African Development Bank is keen to put money toward renewable energy. Climate change has come into play as constraining financial capabilities of oil and gas companies,” said Arron Singhe, Chief Oil Sector at the African Natural Resources Centre, African Development Bank. “COVID-19 is sending a significant message to the African oil and gas industry that the paradigm is changing. As an industry, we need to review the way in which we re-develop projects. When the fundamentals of a project are strong and the sponsors have the financial power and leverage from the market, the project has a higher chance of succeeding. It is very important for private investors to look at the environmental situation in the project. How much of your project is contributing to preserving the environment? Beyond COVID-19, this will influence the financial flow of the oil and gas industry in Africa.”

In terms of mergers and acquisitions driven by COVID-19 as companies attempt to consolidate assets, the trend is expected to defy that of previous financial downturns.

“From 2014 onward, we saw a scramble for assets,” said Ashong. “At that stage, company valuations were at their lowest. This time, the trend is the opposite. Companies that will most likely be acquired face several more challenges beyond just acquiring cheaper assets. They have put disposal plans in place to meet cost reduction targets. There are severe constraints on capital and dwindling cash reserves are being prioritized for divided payments. Acquisition targets are also not as attractive as we wished them to be.”

Going forward, there are various financial models that can be utilized to alleviate individual risk and reduce financial exposure of companies in the face of an uncertain operating environment.

“Angola is a strong example of this, as the country essentially moved down this route two to three years ago, explicitly with the marginal field terms and gas law,” said Eardley-Taylor. “Our general understanding is that on a case-by-case basis, individual concessions have been able to amend fiscal terms. For three different concessions, Angola did a ‘blend and extend.’ By getting a longer contractual term for the concession, a percentage of equity was then given to Sonangol that it previously didn’t have.”