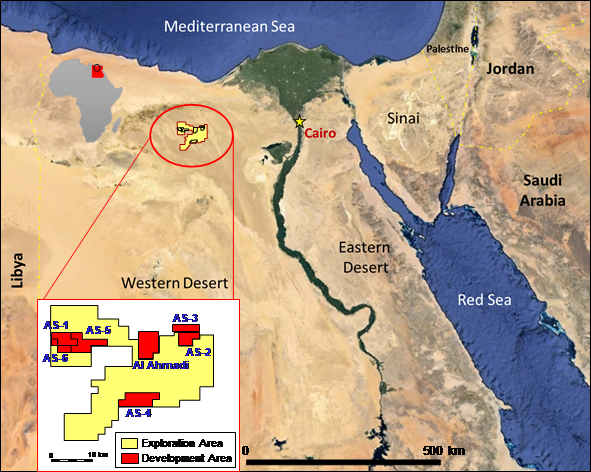 United Oil & Gas PLC has announced an update on the ASD-2 development well in the Abu Sennan licence, onshore Egypt. United holds a 22% working interest in the licence, which is operated by Kuwait Energy Egypt.

·      A rig has been mobilised to drill the second well in the 2022 drilling programme. This is the ASV-1X exploration well which is expected to spud in the coming days

“This is another fantastic drilling result, significantly  above our pre-drill expectations. The ASD-2 well is the eighth consecutive successful well at Abu Sennan since we acquired the licence in 2020.  The wells within Abu Sennan have an exceptionally short turnaround time between well completion and commencement of  production – typically a matter of days for development wells. With our production being leveraged to the current higher oil prices, this additional production rapidly generates revenue and cashflow for United.  We have had a great start to the year with the agreement on the Crown milestone payment followed by this impressive drilling result and we look forward to continuing our 2022 drilling programme with the ASV-1X exploration well, due to spud in the coming days. We are also pleased to have added a firm development well to the drilling programme. There remains vast potential in the Abu Sennan licence and against the backdrop of higher commodity prices it is great that the JV partners have the flexibility to optimise the  drilling programme to generate the best returns”.

The well has now been tied into the existing facilities and brought on stream at an initial rate of c. 2,100 bopd gross (462 bopd net) on a 28/64″ choke. This is just six days from well completion to production, and this short turnaround time means revenue is rapidly generated for the Company.  The excellent rates achieved on test have demonstrated the potential of the AR-E reservoir at this location. The well will continue to be monitored, so that the long term production potential of the well can be assessed.

Following the completion of the ASD-2 well, the first well in the in the 2022 Abu Sennan drilling campaign, the ECDC-6 rig has been released. The second well to be drilled will be the ASV-1X exploration well.  The Sino Tharwa-1 rig which will be used to drill the ASV-1X well has been mobilised. United estimate that the ASV-1X structure has the potential to hold over 2.5 million barrels gross mean recoverable resources. The well is expected to spud in the coming days.

In response to the sustained high oil-prices and the results of recently completed technical work, the fully funded 2022 drilling programme at Abu Sennan will now include a fifth firm well. The drilling programme had initially included four firm wells and one contingent well, which was dependent on the results of technical studies on the Al Jahraa field. These studies have now been completed, and have led to the Al Jahraa-14 development well (AJ-14) being approved by the Joint Venture partners. AJ-14 will target multiple Abu Roash reservoirs with the aim of accessing additional reserves and accelerating production. It replaces the AJSE-3 water injector that was initially proposed as a contingent well. The AJ-14 well is likely to be the third well of the 2022 campaign, followed by the ASH-5 development well at the ASH field.